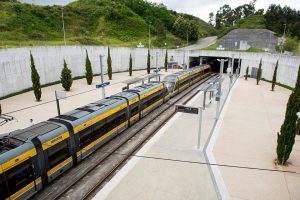 Porto Metro received a EUR 107 million through the Cohesion Fund for the extension of the Yellow metro line, from Santo Ovídio to Vila d ́Este.

EUR 169 million is the value of the project which envisages the construction of a 3.15 km metro extension and three stations at Manuel Leão, Hospital Santos Silva and Vila d ́Este. The project also includes the construction of a depot and workshop, and an additional track for reversing vehicles south of Santo Ovídio. The depot and workshop will improve the operation and maintenance of rolling stock, including parking for 20 vehicles, a service station, a washing building and a small workshop complemented by warehouses and technical rooms for specialised operations. Access will be via two single-track branch lines.

The extension will run across a viaduct comprising three structures totalling 555m in length between Santo Ovídio and Manuel Leão, and through a 1 km tunnel containing Manuel Leão station, the only underground station constructed under the project, and adjacent sections. It will end 160m from Hospital Santos Silva and from here, the track will go below ground again, subsequently re-emerging and continuing overground to Vila d’Este. The section between Manuel Leão and Hospital Santos Silva will have an emergency access and ventilation shaft.

Due to its proximity to major roads, the Hospital Santos Silva station will be metro section’s transport interchange and contribute to a reduction in private transport use. The car park at the site will be maintained and renovated to provide a link between the metro station, bus stops and taxi ranks.

As a continuation of the existing yellow line, the new track will use a 750volt, direct current electric traction system with flexible overhead catenary wires. Two traction substations will be built. Signalling, safety, operational support and ticketing systems and equipment will be procured, and the central command and control systems will be adapted to take account of the extension.

The 2,493m segment between Jardim do Morro and Santo Ovídio, where the Yellow line currently ends, accounts for around 4% of the network, but 8% of demand for its services. The area to be served by the new stations encompasses several sites of metropolitan and regional importance.

It is expected that the new metro extension will enter commercial operation in 2023.