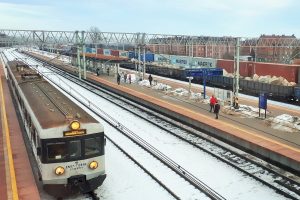 The Polish railway transport was affected by the coronavirus pandemic both on passenger and freight segments, the Office of Rail Transport (UTK) announced.

In December almost 13.3 million passengers chose the rail transport. This means a decrease by 52.4% as compared to 2019. The transport performance decreased by 54.7%, amounting 783.4 million p-km and the operational performance reached almost 14.5 million train-km, a 2.5% decrease. The average distance travelled by a passenger in December 2020 was 59 km by 3 km lower than in December 2019.

“Last year was a time of challenges and difficult decisions for the railway sector. January and February results allowed for a very optimistic forecasts of another year of dynamic growth in passenger transport. The demand in rail travel grew. However, the epidemic had a negative impact on transport results since March. From mid-March to June the largest drops in passenger transport were recorded, amounting to several dozen percent, similarly to the last months of 2020. Holiday months and successive increases during that time have shown that passengers can return to travelling by rail,” Ignacy Góra, the President of the Office of Rail Transport said.

According to the European Commission, in the second quarter of 2020, Poland recorded a 64% decrease of rail passenger transport compared to the similar period of 2019.

Last year, the decrease of the rail freight transport was not as significant as in passenger transport, compared to 2019. The total weight of transported goods was slightly over 223 million tonnes which was a decrease in the transported weight by 13.2 million tonnes (5.6%) as compared to the previous year. The transport performance amounted to 52.2 billion tonne-km, 6.6% less than in 2019. The operational performance dropped by 5.9%, amounting 77.5 million train-km. The average distance was almost 234 km, which is 2.6 km (1.1%) less than in the previous year.

Although the Polish railway transport faced challenges, it was a reliable transport mode and is expected to increase.