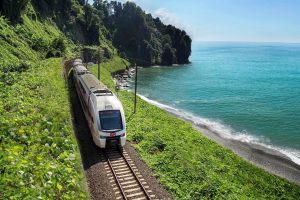 In an open competition under the Twinning project organised by the Georgian national administration, Poland was announced as the winner to provide its expertise to reform Georgia’s railway law.

The aim of the project is to support Georgia to review its regulatory framework on railway transport in accordance with the EU acquis and to adapt Georgian railway sector to the EU standards and regulations and to strengthen and empower the railway regulatory environment of Georgia.

The project will be coordinated by the Polish Ministry of Infrastructure.

The Twinning project will involve the participation of Polish experts from six institutions such as the Ministry of Infrastructure, the Center for EU Transport Projects, the Railway Institute, PKP, the national carrier, PKP PLK, the rail infrastructure manager, and the Office of Rail Transport. The scope of the project is designed to support Georgia in revising its rail transport legislation and adapting it to the requirements of EU directives on market regulation, interoperability and safety.

In an open competition organised by the Georgian national administration, Poland’s offer was chosen from three submitted bids.

Twinning is a European Union instrument for institutional cooperation between public administrations of EU Member States and of beneficiary or partner countries.

The EU countries offer assistance to the countries aspiring to join the EU in adjusting the functioning of certain sectors of their economy to the requirements of EU law.

The Twinning instrument is financed from the EU budget. The amount available for the project with Georgia is EUR 1.25 million and the duration of the project is 27 months.

The specific objective of the project is to upgrade the national railway transport legislation and to strengthen national institutional capacities, inter alia, through the approximation of Georgian legislation to the relevant Union acquis to meet the commitments undertaken by Georgia under the EU-Georgia Association Agreement.

The Twinning project is fully in line with the requirements of the EU-Georgia Association Agreement (AA) and aims to support further effective implementation and fulfilment of the objectives set out in the Agreement. By signing the Association Agreement, Georgia is committed to the gradual approximation of its legislation with the transport acquis, as well as its consistent implementation, including for road, rail, aviation, maritime transport, and intermodality. In total, there are eight EU Directives and Regulations in the field of railway transport and it is expected that the Twinning project will cover all priorities stipulated in three directives:

The Twinning project on Georgia’s railway law will contribute to the further development of extended Trans-European Transport Network (TEN-T) and facilitate smooth implementation of the Indicative TEN-T Investment Action Plan in Georgia.

In Georgia, the railway transport sector is currently regulated by the Railway Code which determines economic, legal, organisational and technological bases for the functioning of rail transport, its place and role in the economy and social sector of Georgia. The Code also regulates legal relations arising during the use of railway services and determines the rights, obligations and responsibilities of participants of these relationships. This Code applies to the carriage of passengers, cargo, luggage, cargo-luggage, and mail on the public railway.

According to the Railway Code of Georgia, it is the obligation of the country to promote the development of rail transport and the creation of favourable conditions for the functioning of this transport sector in view of its strategic and social roles.