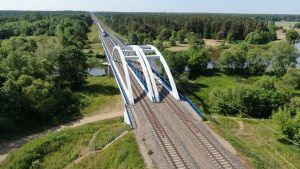 PKP Polish Railway Lines signed a PLN 270 million (EUR 58.18 million) track work contract for the Central Railway Line (Central Trunk Line– CMK) to prepare the line for speeds of up to 200 km/h. The contract was awarded to Pomorskie Przedsiębiorstwo Mechaniczno-Torowe, a company of PKP Polskie Linie Kolejowe and is funded by budgetary resources and company’s own funds.

Under the contract, the work will be performed on the Grodzisk Mazowiecki – Zawiercie rail section which includes the replacement of tracks on 43 km between Psary and Zawiercie. In addition, the works concern harmonisation with the traction network, supplementing the gravel ballast, tamping the tracks and replacing the elements of rail fastening.

The works are scheduled to start in the second quarter of this year and will be completed in 2023. The train traffic at CMK will be maintained.

To increase the speed to up to 200 km/h on the Central Rail Line PKP PLK has modernised 73 structures including bridges, culverts and viaducts as well as under – tracks. Five road and rail crossings were replaced with collision-free intersections.

Currently, 21 facilities are being modernised, including 4 viaducts, 2 bridges and 15 culverts on the Opoczno Płd – Pilichowice route along the CMK. The ERTMS / ETCS level 2 is being also deployed along with the construction of the rail traffic control system on the section between Korytowo and Zawiercie. After completing all the works, including the ERTMS, the certification process approval and obtaining the permission to operate the entire CMK line, it will be possible to travel at a speed of up to 250 km/h.

The project is part of “Track work performance to increase speed on the railway line No. 4 Grodzisk Mazowiecki – Zawiercie” project on the Central Trunk Line.

In January 2021, PKP PLK signed a EUR 9.87 million to modernise 21 structures and facilities along the CMK which are expected to be completed by the end of 2022. In addition, to complete the entire project which will ensure speeds of 250 km/h, the rail infrastructure manager has launched two EUR 54.2 million tenders for the modernisation of two rail sections including the ERTMS deployment.