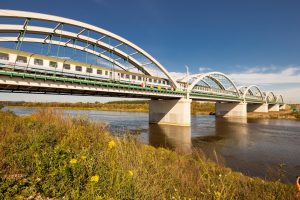 The railway infrastructure managers PKP PLK and LTG Infra signed a letter of intent on the establishment of a Polish-Lithuanian Infrastructure Group to improve the quality of railway connections and cross-border projects including the modernisation of the Rail Baltica route.

The document was signed by the President of the Management Board of PKP PLK Ireneusz Merchel and the CEO of LTG Infra Karolis Sankovski during a videoconference.

“The cooperation between PKP Polskie Linie Kolejowe and LTG Infra is consolidating. We plan to develop and strengthen these relations within the Polish-Lithuanian Infrastructure Group. Our activities will translate into the improvement of the quality of railway communication between Poland and Lithuania. Rail, the most environmentally friendly transport mode will increasingly play a key role in international transport,” Ireneusz Merchel said.

The group will cooperate to improve the railway transport between the two countries. The activities concern, among others, the exchange of experiences and information on the modernisation of Rail Baltica, the cooperation on the development of cross-border connections, including the implementation of technical and operational solutions and the deployment of the ERTMS system. In addition, both infrastructure managers will further strengthen cooperation in the provision and maintenance of railway lines.

“Good cooperation between our companies is important for the development of railway infrastructure not only in Poland or Lithuania, but also in the entire region, especially in terms of the European Green Deal, the key element of which is railway transport,” Karolis Sankovski commented at the signing ceremony.

During the meeting, the cooperation between PKP PLK and LTG Infra in 2020 was summed up and the priorities for cooperation were planned for this year. The key issues are related to the modernisation of Rail Baltica existing infrastructure. The representatives of both companies discussed issues on the unification of the technical requirements and the establishment of a single set of such requirements for Rail Baltica on the territory of Poland and Lithuania.

To ensure efficient and safer driving, the railway systems of Poland and Lithuania must be compatible with each other. Thanks to the cooperation of the two companies, the train journeys across the Polish-Lithuanian border will be smooth and uninterrupted. The border crossing in Trakiszki (in north-eastern Poland) is the only railway border crossing on the Polish-Lithuanian border, and therefore the only one connecting the Lithuanian railway network and the rest of the European Union.