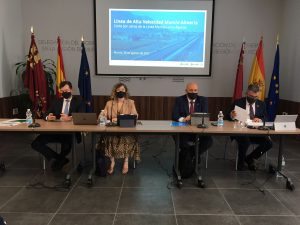 The president of Adif AV, María Luisa Domínguez, has presented a EUR 3 billion plan for the construction of the Murcia-Almeria rail line which will be part of the Mediterranean Corridor.

The project covers the reconstruction and modification of the existing single, non-electrified and 1668mm-gauge track between Murcia, Pulpi and Aguilas, which also includes the adoption of a a new alignment, the removal of the existing level crossings. Between Murcia and Pulpí, a platform for double track in standard and electrified gauge will be created, and from here to Almería and Águilas the line will be bifurcated.

The works along the 106.9 km line will be split into seven sections beginning with the integration of the rail line in Murcia, between Murcia del Carmen and Barriomar stations. 31.3 km is the longest section which will connect Lorca and Pulpí, while the shortest section of 7 km will be constructed in Totana.

Along the sections, the project includes the construction of 23 viaducts, 9 tunnels, of which 4 new and 5 to be expanded and 20 structures. 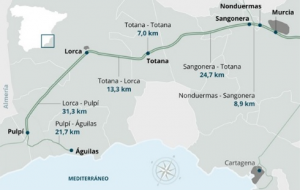 The project will receive a EUR 446.6 million European co-financing under the European Recovery and Resilience Mechanism (MRR) through the NextGenerationEU facility which also provides funding for the construction of a direct high-speed rail link at the Madrid-Barajas Adolfo Suárez airport.

Under the 2014-2020 MFF, through the European Regional Development Fund, it is estimated that EUR 560 million will support the works along the Nonduermas-Vera, Los Arejos-El Puche rail sections. In addition, in the period of 2007-2013, the ERDF within the Cohesion Fund, the drafting of projects and the works for Vera-Los Arejos section received EUR 321.7 million, and the works for Alhama-Lorca section, EUR 25.5 million.

By now, the project benefited an investment of EUR 1.3 billion and the new European financing is conditioned by the implementation schedule.

To accelerate the project, the passenger traffic will be interrupted and will be carried out works at each of the existing platforms along the route, while the freight traffic will be maintained. AdifAV says that after studying all the possible options, it has been concluded that the most advantageous way to make the most of the European funds from the Recovery and Resilience Facility is to reduce the execution times of the works as much as possible and to work simultaneously on several sections, so it is essential to interrupt rail traffic.

When the project will be completed, the travel time will be reduced by 30% and it will provide increased connectivity with the rest of the Mediterranean Corridor and the network of high-speed to Madrid, Barcelona, Valencia, and other cities. In addition, the new line will improve the commuter rail services as it will be connected to the Cercanías service in Águilas.

It is expected that the demand for the rail transport on Murcia-Águilas route is 2-3 million per year compared with the current 1.2 million.

The Murcia-Almeria rail line is of great importance for the economy and the mobility in the region, providing connections to the high speed and very high-speed network, while creating a modern rail system in the Mediterranean arc.