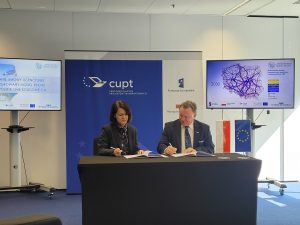 The Polish Center for EU Transport Projects (CUPT) and PKP Polish Railway Lines signed an agreement on the use of the digital national transport model (ZMR) that will support decision-making and planning processes at national, regional and local levels.

The agreement will contribute to the creation of a coherent transport planning system at the national level based on modeling results and demand analysis.

“The developed traffic model will allow PKP Polskie Linie Kolejowe to better plan the investments in response to social and economic expectations regarding increasing the accessibility to railway infrastructure, in order to better use the ecological means of transport, which is rail,” Ireneusz Merchel, the CEO of PKP PLK said.

The traffic model developed by CUTP is a comprehensive digital tool to allow an objective verification of the potential of individual investment projects in terms of their future use by passengers – assuming many external factors, such as the development of cities, shaping the offer of carriers or changes in the demography of the society.

The primary objective of the ZMR is to assist ministries and other institutions, including companies and organisations providing public services in the transport sector, in the planning process and in making investment decisions that ensure reliable, accessible, safe, comfortable and resilient transport infrastructure, planned at a level that stimulates national economic development and reduces external costs. In addition, the ZMR is also a tool to support the fulfilment of the European Commission’s requirements for funding the transport investments in the 2021-2027 horizon. Among these conditions was the identification of the current and future condition of the planned transport infrastructure considering, among other things, traffic analysis and economic evaluation based on demand analysis and traffic modelling.

The national transport model is “the first in Poland, fully multimodal and 4-step traffic model covering the entire country, with the level of detail of municipalities and transport infrastructure. It is also a comprehensive tool that allows you to consciously plan the development of the transport system in Poland, including railway investments,” Joanna Lech, acting Director of the CUPT said.

For the railway transport, the integrated traffic model will help to the development of the network in accordance with the latest state of knowledge regarding long-term documents (including the list of investments), will also deliver a transparent access to the assumptions provided by formulas in all four modeling stages for each travel selection offered by the solution. In addition, the tool will detail all public transport network including the routes, stops and stations, travel time between stops, maximum speed, segment, fares and frequency and develops traffic forecasts based on available data sets and on expert assumptions.