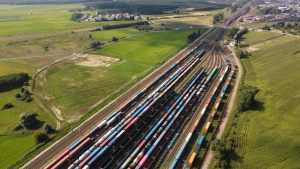 The Management Board of PKP Cargo and PKP Polish Railway Lines (PKP PLK) signed a letter of intent for the acquisition of 100% of Cargotor.

Due to the infrastructure investments planned in the Małaszewicze Transshipment Zone, in which both Cargotor and PKP PLK are involved, the parties expect that the acquisition of the stake in Cargotor by PKP PLK will generate synergies triggered by the execution of the investments.

The two companies are intent on completing their negotiations by the end of June 2022 at the latest.

The company owns Malaszewicze Cargo Terminal situated on the Rail Freight Corridor 8, at the border between the EU and Belarus. The terminal will be modernised to become the Polish gateway to the New Silk Road. The project covers the modernisation and expansion of the 1435 mm and 1520 mm tracks as well as the development of modern rail traffic control systems.

The optimised arrangement of rails will ensure increased throughput capacity of rail systems and access tracks.

The project will be implemented to complement other activities of PKP Polskie Linie Kolejowe in the area, such as the modernisation of the Siedlce-Terespol section of E20 Railway Line, the improving accessibility of Tersepol-Brześć border crossing (Phase I) covering the extension of 1520 mm rail tracks at Terespol station and the construction of a new bridge on the Bug River. These complementary projects, initiated in order to meet the EU standards regarding railway infrastructure, offer a chance to create a modern cargo hub in Małaszewicze.

The project is implemented through European funds from the Cohesion Fund under the CEF. EUR 2.6 million is the value of the project, which received EUR 2.2 million co-financing covering 85% of the cost of the project.

In 2020, PKP Cargo Terminale signed a contract for the modernisation of Malaszewicze terminal.

signed a contract for Malaszewicze terminal modernisation and expansion project, including the procurement of the needed equipment.