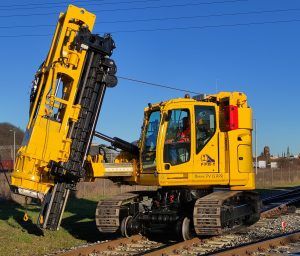 Thanks to the capital injection from PKP Polskie Linie Kolejowe the subsidiaries can purchase the most modern machines for track works and devices for work on the traction network. From the recapitalisation funds and own resources, PPM-T signed a contract for the supply of three two-way vehicles for the amount of almost PLN 25 million (EUR 5.4 million). The vehicles will be delivered in the first half of 2024.

They will be used for works related to the construction and modernisation of the traction network.Two two-way vehicles will be equipped with devices necessary for the construction of the traction network, includingwork platform, crane, overhead contact line corrector and measuring pantograph.Additionally, it will be possible to use the vehicles for the assembly of pile foundations to the catenary.The third of the two-way machines will be equipped with a catenary disassembly and assembly system.

“The recapitalisation of subsidiaries of PKP Polskie Linie Kolejowe allows them to increase their potential in terms of maintenance and modernisation of the railways. First of all, dynamic development in the railway energy industry will be possible. The companies will gain greater independence in the investment process and, successively, they will be able to take over maintenance services that are currently outsourced,” Ireneusz Merchel, the CEO of PKP Polskie Linie Kolejowe said.

The track work machines will allow to increase the efficiency of the works and improve the quality of the traction network.The use of two-way machines for piling, assembly of supporting structures and accessories will allow the implementation of work on the traction network even in places where the track system has not yet been built.An additional advantage of two-way vehicles is the ability to quickly change the order of machines on the trail, which will significantly improve the work.

Since February 2022, a two-way, track-and-rail piling machine has been operating on the Polish railway network, with the help of which the support structures of the overhead contact line are assembled. The machine is equipped with a CFA module, a special technology in which a drill is used to make a hole several meters in the ground into which concrete is pressed. After the hole is filled with concrete, reinforcement is placed in it, which strengthens the foundation structure. CFA technology is used in places where it is not possible to install a pile foundation. The new piling machine is a two-system machine, it can drive pile foundations both from the railway track and from the ground. This is the first delivery of specialised equipment as part of the recapitalisation programme for subsidiaries of PKP Polskie Linie Kolejowe. The value of the machine is over PLN 5 million (EUR 1 million).

The first field works with the use of a new piling machine were carried out on the Sosnowiec Dańdówka – Katowice Muchowiec – Panewnik route and on the Ostrołęka – Chorzele line. The machine will also be used in the second half of the year on the Glincz – Kartuzy route.

PPM-T signed in 2021 contracts to supply two adjustment and assembly vehicles which are expected to be delivered by the end of this year. In addition, the company also signed a contract for the supply of a heavy train for work on the overhead contact line which will be supplied in 2023. PLN 34.6 million (EUR 7.47 million) is the total value of the two contracts