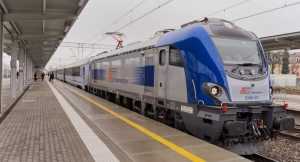 By the end of 2021, PKP Intercity will obtain PLN 522 million (EUR 111.8 million) EU funds granted in 2018 for infrastructure and rolling stock projects under two main programmes. The co-financing represents 80% of the projects’ value and contribute to the implementation of a total of 54 investment tasks – 12 rolling stock and 42 infrastructure tasks.

Under the contracts signed in 2018 with the Center for EU Transport Projects, PLN 653.73 million (EUR 140 million) was the maximum amount of co-financing granted to PKP Intercity for both projects.

The EU funds contribute to the implementation of a total of 54 investment projects, of which 12 cover the rolling stock modernisation and 42 include infrastructure programmes.

The Polish operator is currently implementing the “Time for good connections – modernisation of wagons and locomotives for PKP Intercity” and “We are accelerating comfortably – modernisation of wagons and purchase of locomotives for PKP Intercity” projects co-financed by the Cohesion Fund under the Operational Programme Infrastructure and Environment. Their total value amounts to over PLN 2.5 billion (EUR 535.6 million).

In the coming weeks, acceptance of 60 multi-functional Combo carriages modernised by Pesa and ZNTK Mińsk Mazowiecki will be completed providing passengers with disabilities, families with children and people traveling with bicycles increased access.

The infrastructure component covers the modernisation projects at stations across the country. PKP Intercity has completed the reconstruction of parking area at Olsztyn and Kołobrzeg stations. The comprehensive modernisation of the Szczecin Zaleskie Łęgi station is currently underway, and the modernisation of the compressed air system and of the water system have started in Kraków. Modernisation works are also underway at the depot in Wrocław, where an automatic rolling stock wash is also being built. A similar car wash will also be built at the Kraków Główny West station. The parking station in Warsaw has been equipped with washing devices for a car wash and a track lathe, and in Wrocław, the canals of the whole-train depot are being rebuilt. With EU funding, PKP Intercity purchased 7 rail-road vehicles, which are used in Gdynia, Kraków, Przemyśl and Warsaw stations. Preparations are underway for the implementation of further infrastructure investments.

In addition, the EIB is analysing a rolling stock renewal project at a value of PLN 9.3 billion (EUR 2 billion)  for which a PLN 4.5 billion (EUR 964 million) is the proposed financing.