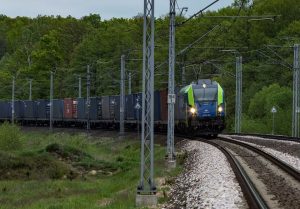 Based on this loan, the company can finance and refinance the development plan, with an available investment of EUR 200 million.

Last year, the company has signed several contracts with manufactures.

At the beginning of 2019, the Polish rail freight operator has ordered from Siemens Mobility 5 additional Vectron MS locomotives under a EUR 24.5 million contract which also includes maintenance services. The contract was part of a framework agreement signed in 2015 for 15 Vectron MS locomotives which included the exercised option. The locomotives are used on north- south corridor. They run at a top speed of 160 km/h and equipped with an ETCS. PKP Cargo has a fleet of more than 20 Vectron locomotives.

PKP Cargo rolling stock modernisation plan also included a EUR 80.6 million contract signed with Tatravagónka for 936 flat cars. During this year, the manufacturer will have to deliver 400 cars, 298 flat cars next year, with the last 188 flat cars in 2022.

To modernise and develop its fleet, PKP Cargo, the Industrial Development Agency (ARD) and Wagonami Świdnica, a rolling stock manufacturer owned by Greenbrier, agreed on joint production and repair services of operator’s freight wagons. The companies opted for several plants’ development, including the Gniewczyna Wagon Factory, the companies would start production this year, according to the initial plans.