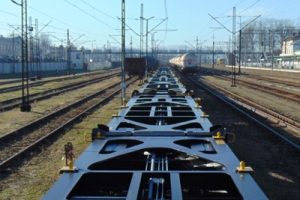 Tatravagónka has delivered PKP Cargo 21 platform container wagons under a contract for the supply of a total fleet of 936 wagons for intermodal transport.

Since the beginning of the project, PKP Cargo has increased its 80-foot Sggrs container wagons to 197 units. By the end of this year, the Polish operator will have a total fleet of 400 wagons of which 300 Sggrs and 100 Sgmmns wagons.

As part of the contract signed in March 2019 with Tatravagónka, PKP Cargo ordered the 936 wagons for intermodal transport in three different designs and loading lengths with a deadline delivery of 31 December 2022.

Thanks to the modern rolling stock procurement, operator’s operational capabilities on the intermodal market will significantly increase. This is essential for the implementation of the strategy, an important component for the development of intermodal transport. This process is already visible in the transport structure of the PKP Cargo Group, where intermodal accounts for over 15 percent, which is more than twice as 4-5 years ago. This share will certainly grow at the expense of bulk cargo, applied to both the domestic and international markets.

“The situation on the European and global market shows that the development in the area of intermodal transport and the development of logistics services is a key activity of the changing economic reality. PKP Cargo takes these factors into account when implements the strategy. The purchase of intermodal platforms is one of the largest investment projects implemented by the company,” Czesław Warsewicz, PKP Cargo President said.

The procurement of the new wagons is a key investment part of the “Platform wagons for intermodal transport” project which has received the European Union funding under the Infrastructure and Environment Operational Programme 2014-2020.

The value of the signed contract is over PLN 368 million (EUR 83.5 million), and the co-financing from the European Union exceeds PLN 183 million (EUR 41.5 million).