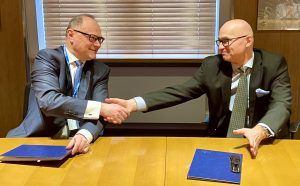 Siemens Mobility and PKP Cargo signed an agreement for the supply of 5 Vectron multi-system locomotives together with an 8-year full maintenance service. In addition, Siemens Mobility will provide software to support the operation of the locomotives and a set of brand new spare parts and components. The deliveries are planned in the first quarter of 2023.

Vectrons are the most modern universal locomotives on the European market, with a modular design that enables them to be easily adapted to the requirements of use and specific running
in different countries and different operating conditions. The locomotive was built with a view to carrying out various transport tasks. The basic assumption for the construction of the vehicle was the efficiency and cost-effectiveness of carrying out traction tasks in domestic and cross-border traffic, both for passengers and passengers and cross-border passenger and freight traffic in Europe.

This is the third purchase of Vectrons in the history of PKP Cargo. In September 2015, the company decided to sign a contract for the delivery of 15 vehicles, and in 2019 it exercised its option to purchase another 5 electric locomotives. Now Poland’s largest freight carrier is again opting to supply 5 Vectron locomotives, this time for the development of intermodal transport in Poland and Europe.

“The agreement is part of a major investment programme of PKP Cargo concerning the purchase of rolling stock to operate intermodal connections, for which we have received EU funding. The Vectron locomotives will be used for international transport, the development of which is one of the development directions pursued by our company. The majority of intermodal transport on Polish railways is transit, which is why we need modern rolling stock to handle international connections.“ Marek Olkiewicz, Member of the Management Board for Operations at PKP Cargo said.

The Vectron MS locomotives purchased by PKP Cargo have a power output of 6.4 MW in AC supply and 6.0 MW in DC supply,and have been equipped with the ETCS system in accordance with the current specifications (Baseline 3). They are approved for Poland, Germany, Austria, the Czech Republic, Slovakia and Hungary, while vehicles from the Vectron platform – as the only modern locomotives in Europe – are approved for operation in as many as 20 European countries.

The signed agreement is an element of the implementation of the “Multi-system locomotives and wagons for intermodal transport” project, which is co-financed by the European Union from the funds of the Cohesion Fund under the Infrastructure and Environment Programme.

The Polish rail operator has signed an agreement with the Centre for EU Transport Projects for the purchase of new rolling stock. The project includes the acquisition of 220 wagons-platforms for container transport for which the contract was signed with the consortium of Wagony Świdnica and Astra Rail Industries and the second contract covers this latest locomotive order. The value of both contracts amounts to approximately PLN 247 million net (EUR 54.45 million), of which almost PLN 92.4 million (EUR 20.4 million) is EU co-financing.

With this agreement, PKP Cargo will own 25 Vectron multi-system locomotives.