Railway connections for Romanian airports. Several airports in Romania are taking steps to have rail connections with the nearby cities. The first project of this kind was completed last month in the country’s capital city of Bucharest, but others are in various stages.

After a year and a half since the signing of the design and works contract, Henri Coandă International Airport, the largest in Romania, located near the capital city of Bucharest (south of the country), has a functional railway connection with the main rail gateway of the city, North Railway Station.

The decision to link Romania’s capital city to the airport was made after Bucharest was designated one of the 12 cities that would host European Football Championship Euro 2020 matches. Consequently the mobility of the supporters of the teams that were going to play on the stadiums in Bucharest, which were also rebuilt, had to be secured.

Done and done. A project was drawn up, a tender was organised, and on June 11th, 2019 the representatives of the Romanian Ministry of Transport, Infrastructure and Communications signed the contract with the constructor, who promised that if he received support from the state, he would finish the work before June 2020, when the sports competition was set to take place.

The constructor of choice was the consortium made up of SC Arcada Company SA – SC ISPCF SA (both from Romania) – DB Engineering & Consulting GMBH (Germany). The other two participants in the tender organised by the CFR SA National Railway Company (the Romanian railway infrastructure administrator) were Porr Construct from Austria and Mapa Inşaat VE Ticaret AŞ from Turkey. The value of the winning bid was RON 398.16 million, excluding VAT, the equivalent of almost EUR 100 million.

The contract had a duration of 14 months (two months for the design and 12 months for the execution), and the source of financing was provided from cohesion funds and from the state budget for the multiannual financial framework 2014-2020. The object of the contract aimed to ensure a direct connection between Bucharest North Railway Station and Henri Coandă International Airport in Otopeni by building a 2.95 km long rail, a 1.52 km long viaduct (37 piles and one abutment) that passes over the main national road in Romania, three bridges, an electronic centralisation installation and a passenger station at the Arrivals Terminal of the airport.

Another contract was performed in parallel with the Austrian company Porr Construct, who doubled the existing tracks along the route. This investment, amounting to RON 50.5 (the equivalent of over EUR 10 million), received financing from the Romanian state budget. The project involved the execution of railway infrastructure and superstructure works along the entire route, spanning approximately eight kilometres, and the construction of a stop.

The contract, previously signed at the end of April, covered a complex range of railway infrastructure and superstructure works along the entire route, through works to consolidate and widen the railway bed, install the superstructure of the line for the construction of double tracks over the entire distance, repair and consolidate four culverts, three bridges and a level crossing.

In both contracts works, contractors preferred local suppliers for building materials and prefabricated components. For example, on the newly built railway, the sheet metal used for the viaduct was manufactured by the largest steel plant in Romania, the steel mill controlled by Liberty Steel Group in Galați (southeast of the country), the city where the general contractor Arcada Company has its headquarters too.

Expropriations, disputed in court by a billionaire

After signing the contracts, it was the builders’ turn to get to work. In the first part of September 2019, the installation of the pillars of the future viaduct to Henri Coandă Airport began and everything seemed to go according to the initial estimates.

But lawsuits filed by the landowners on the route of the new railway began, dissatisfied with the way the Romanian state carried out the expropriations. Among the disputing parties there was also the billionaire Ion Țiriac, former world top tennis player in the 70s. The tycoon had inaugurated an ice rink in 2016, following an investment of over EUR 3.6 million and now believed that the railway was too close. In addition to suing the Romanian state, the tycoon threatened to tear down the skating rink. 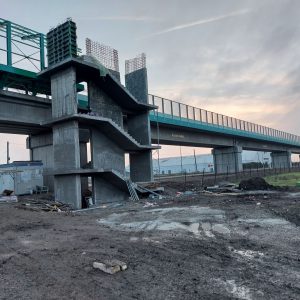 It took several court decisions in order for the owners of the houses and land plots along the route of the railway to manage to obtain the suspension of the works on a portion of several hundred metres. Then, the disputing parties began to back out from the court action, one by one, as they reached agreements with the representatives of the Romanian state.

In January 2020, Ion Țiriac also gave up, after a meeting with the new Minister of Transport, Lucian Bode, during which he obtained the promise that a railway station would be built next to his skating rink (photo). Representatives of a nearby hotel also stepped back from the lawsuit, after signing an agreement with the Ministry of Transport, a decision weighed heavily by the fact that a railway station was to be built between them and the skating rink. Finally, the last opponent of the project, the owner of a house in the area, lost the lawsuit in November 2020 and the decision was final.

Railway connections for Romanian airports. Saved by the coronavirus bell

Despite these restrictions imposed by the courts, the works eventually continued, after the minister and officials of the railway infrastructure company undertook to issue administrative documents in this regard. However, the project could not be completed on time, before the expected Euro 2020. But Bucharest was saved by the bell. The bell rang by UEFA, which announced on March 17th that the Euro 2020 was postponed for 2021, due to restrictions imposed by the Covid-19 pandemic. Under these circumstances, the railway project had all the time in the world to be completed before the sports competition.

The 2021 competition will take place between June 11th and July 11th. The event in the summer of 2020 should have been organised in 12 cities, between June 12th and July 12th, including Bucharest. Due to the coronavirus pandemic, the European Championship was suspended at the time, as were Champions League and Europa League. The competitions later resumed gradually, but without spectators in the stadiums.

Completion of the project, greeted by the European Commissioner for Transport

Finally, after several tests, the trains started to run on the new railway connection between the North Railway Station and the Henri Coandă Airport on December 13th, 2020, with the entry into force of the new Train Schedule for 2020-2021. On the first day, the first problems appeared with the signalling system, while some trains experienced delays, but everything returned to normal eventually.

Now, the direct connection to and from the largest airport in the country is secured daily by 72 trains (36 pairs), which belong to the following three operators: SNTFC CFR Călători (the national passenger rail transport operator in Romania) – 42 trains, Regio Călători (private operator) – 20 trains and Transferoviar Călători (private operator) – 10 trains. A journey (19 km) with the airport train takes between 20 and 25 minutes, and finally, after negotiations between the Ministry of Transport and the operators, the price of a was set at RON 4, the equivalent of EUR 0.82.

The Otopeni project is the only one completed, but not the only one in place for airports in Romania. Other large cities also plan to make such investments. 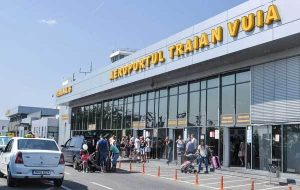 In Timișoara (west of Romania), following a tender, the contract for a feasibility study on the construction of a railway connection between Traian Vuia International Airport (photo) and the city, more precisely between the air gateway and the existing railway network, has been awarded. The study, which will be conducted over the course of one year, will most likely provide two or three project variants, according to CFR SA officials. Then the design part, estimated at six months, and the work execution part, estimated at 18 months, will be put up for tender.

In Brașov (centre of the country) too, where the airport is under construction from the ground up, to be ready soon, the company that manages the Romanian railway infrastructure has launched a similar feasibility study. The project would involve the use of the existing railway network and then its extension with a new 2.5 km long track.

On the other hand, the City Hall of Cluj-Napoca (city in northwestern part of Romania) signed a contract amounting to RON 35.9 million (EUR 7.4 million) with the consortium made up of SWS Engineering (Italy) – Systra (France) – Metrans Engineering (Romania) for pre-feasibility and feasibility studies in order to carry out the “Cluj metro and metropolitan train” project. The metropolitan train would use the existing railway network and connect with the Avram Iancu International Airport near the city.

In Sibiu (centre), the company that operates Abu Dhabi Airport, through Sky Capital, wants to build a railway link to the Airport as part of its modernisation process. The project includes the modernisation and doubling of the existing track, which connects Sibiu Railway Station and the West Area or Sibiu Airport respectively. The new airport railway station will cost EUR 708,000.

In Bacău, too, the recently elected mayor of the September 2020 local elections, Lucian Viziteu, promised during the campaign the introduction of a train to connect Bacău Railway Station to the Airport, on the railway that already exists. This is not the first time that the issue of introducing a train to Bacău Airport has been raised. It was brought up in 2009, when Bacău International Airport was leased to Blue Aero SRL, controlled by the same businessman who also had the low-cost air operator Blue Air in his portfolio. The lease was then terminated.