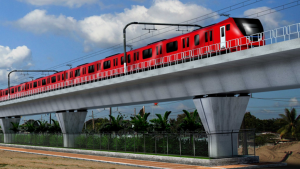 Philippines Department of Transportation (DOTr) initiated an invitation for bids from Japanese companies for the supply of express trainsets and the electrical, mechanical and track work for the North-South Commuter Railway (NSCR) project.

The trains will run at a speed of 160 km/h and they will be equipped with the ETCS Level 2, automatic train operation to increase safety, an electric drive passenger door system with platform screen doors to minimise accidents, and four units of closed-circuit television cameras inside each car to enhance security.

The other bid covers the supply of railway components for the future rail system including 107 km of double track works, 4 km of tracks to the depot and 40 km of tracks in two depots. The procurement includes the delivery of the signalling systems (ETCS L2/GSM-R), the provision of the automatic train operation, the automatic train supervision at the OCCs, the telecommunications for mainline and depots, CCTV, passenger information system, power supplies and overhead contact lines. The contract oversees the implementation of an automatic fare collection system for cashless transactions, a computerised maintenance management system, and platform screen doors in all of its 35 stations. It also directs the procurement of facilities for depots, workshop equipment and training centres for railway and train maintenance and staff development purposes.

Both tenders are funded by the Japan International Cooperation Agency (JICA) under a JPY 167.199 billion (USD 1.5 billion, in current prices) agreement signed in January 2019 for the financing of NSCR and Malolos-Clark rail projects.

The North-South Commuter Railway (NSCR) is a project to link Calamba in the South to New Clark City (NCC) in the North via Tutuban, Malolos and Clark with a modern, fast, and reliable commuter railway. The system will link the regions by a 147 km rail connection. Under the first phase, a 38 km-long railway line will connect Malolos in the Province of Bulacan to Tutuban in Manila. 35.4 km will be constructed as viaduct. This section will be served by 10 new stations and a depot located at Valenzuela. The line, which will reduce the travel time to 35 minutes is expected to be daily used by 200,000 commuters.

The second phase of the NSCR covers a 52-km line that will run northwest from Manila’s northern suburb of Malolos to the Clark economic zone and Clark International Airport in Central Luzon.