Pete Buttigieg, nominated by the President Joe Biden for Secretary of Transportation, has ambitious plans. The young politician aims to radically change the way of life of Americans, established for decades, and to make them give up their personal cars in favour of public transport, in particular rail. 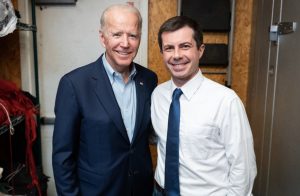 In the late 19th century and early 20th century, the United States was the realm of major railroad projects. Using the state of the art of that time, transcontinental railroads were built, thousands of kilometres long, sleeping cars, the famous Pullmans were introduced, and Hollywood stars travelled across the country by train.

Those times are long gone, and, for (many) decades, any American has had at least one car. And that is because there are whole areas you just cannot reach if you do not have a car, but also because this has become part of the American lifestyle.

Well, it is precisely this lifestyle that Pete Buttigieg wants to change, a young former mayor of South Bend, Indiana, a city of about 100,000 people. Crossed by two crowded freight railroads, this city is a stop serving two routes, the long-distance Amtrak and the eastern end of a commuter train to downtown Chicago.

Passionate about trains since childhood

So far, he has only dealt with local rail issues, supporting, as mayor, a 16.9-mile (approximately 27 km) double-track expansion project of the South Shore Line from Gary to Michigan City. In his acceptance speech, Pete Buttigieg has confessed that he has been passionate about rail transport since childhood. “I’ve also had a personal love of transportation ever since childhood. More than once, as a college student, I would convince a friend to travel nearly a thousand miles back to Indiana on Amtrak, though I know that in this administration, I will at best be the second biggest train enthusiast”, he said, obviously referring to his boss Joe Biden, nicknamed Amtrak Joe, because he has commuted by train from Delaware to Washington for years.

Now, the decision-making power of the former mayor is going to grow exponentially, becoming national at the federal level. And from his position as Secretary of Transportation, he wants to rebuild from the ground up the way his fellow citizens travel.

He proposed a USD 150 billion budget for the Federal Transit Administration, more than 13 times higher than at present (USD 1.2 billion budgeted in 2019). An attitude that is in line with that of Joe Biden, who promised in the election campaign that he would “provide every American city with 100,000 or more residents with high-quality, zero-emissions public transportation options through flexible federal investments”, but avoided to put forward any figure.

Applauses for Pete Buttigieg from the railway industry

Not surprisingly, his approach was welcomed with ovations by the representatives of the railway industry. “Amtrak is excited to work with Transportation Secretary designee Pete Buttigieg to launch an era of passenger rail expansion and improvement across the nation. President-elect Biden knows that rail investments will support economic recovery, expanded mobility, and carbon emissions reduction and we are looking forward to working with Mayor Buttigieg and the new Administration to advance these essential goals”, stated Tony Coscia, Board Chairman of Amtrak.

Passengers, too, are more than happy with this change in optics at the federal level. “Mayors are the frontline officials in the campaign to rebuild U.S. infrastructure. As a small-town mayor—and, more specifically, as an Amtrak mayor—Buttigieg will understand the challenges that come with keeping people physically connected to economic opportunity, the inadequacies of existing federal transportation programs, and the unacceptable timelines for review that delay far too many projects. We look forward to working with the incoming secretary on fixing those problems and connecting all Americans to a growing passenger rail network—whether they live on Wall Street or Main Street”, said in his turn Jim Matthews, President and CEO, Rail Passengers Association.

One of Pete Buttigieg’s guiding principles is “More public transportation – but in the country!”. And that is because the United States is facing a sharp polarisation of investment-oriented money – most public transportation systems (in terms of length) are in rural areas, but only 12% of FTA money has been directed to these areas last year. Under these circumstances, the future Secretary of Transportation wants the sums allocated to transport in rural areas to increase from USD 659 million to 1.2 billion.

Another direction of the programme is focused on a better railway connection inside the cities but also on the intercity relations. His programme seeks to render obsolete the argument that America cannot end its self-centeredness because it cannot travel between distant cities without a car. Better national rail connectivity will certainly help in this regard, says Pete Buttigieg.

In fact, the entire programme of President Joe Biden’s team, known as a big supporter of Amtrak, refers to rail transportation. And, since Amtrak Joe used the train to commute between Washington and Delaware in the years when he was a U.S. senator and then became involved in supporting several rail projects, it is very possible that Biden will show Buttigieg a few things when it comes to trains.

A 180-degree change from the Donald Trump administration, who in February last year proposed cutting Amtrak’s budget to half for 2021 and trying to cut budgets for many other major rail projects. Now, the Biden administration, which will come to office at the White House, promises to supplement funds allocated to the budget for long-distance train travel, including Amtrak, and increase funding for other investments in rail, airport, or naval infrastructure (ports). Biden administration is also much more likely to work smoothly with mayors in large cities seeking federal funding for major rail projects.

New York, for example, has requested major federal funding for its efforts to optimise transportation capacity on the Northeast corridor which has been overcrowded, both in terms of the roadway and in terms of the stations. A White House led by Joe Biden is willing, at least when it comes to making statements and before taking office, to promote long-term infrastructure projects and to continue funding projects that are already ongoing. Some members of Joe Biden’s democratic team are even talking about sparking a “second great rail revolution”.

And finally, here is another excerpt from Pete Buttigieg’s speech that reflects his attachment to transportation systems in the United States: ”My hometown of South Bend, Indiana was built by the power of American transportation: from trade along the river whose bend gives our city its name, to the rail lines that connected us to the rest of the country back when we were considered the West, to the livelihoods created by good-paying union jobs at aeronautical suppliers like Bendix and the giant auto assembly of Studebaker”.