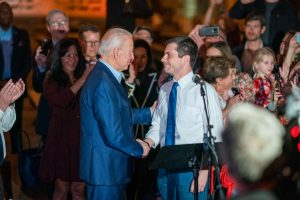 The president-elect of the United States, Joe Biden nominated the Mayor of South Bend, Indiana, Pete Buttigieg as the US Transport Secretary to succeed Elaine Chao.

“I am proud to nominate our Secretary of Transportation Pete Buttigieg. The US Department of Transport is a critical mission, with critical responsibilities particularly in this Administration. We need someone who knows how to work with state, local and federal agencies. We selected Pete for Transport because the department is at the intersection of some of our most ambitious plans,” Biden said at the official ceremony.

While talking about the status of the US transport system and infrastructure, Biden said that “there is so much we can do. When I think about climate change, I think about jobs that put America at work, making air cleaner for our kids, restoring our crumbling roads, bridges and ports, making them faster, clear and cheapest to transport America-made goods across the country and around the world.”

“The jobs will lead the lines for the second great rail revolution which not only will slash the pollution but slash the commute times, open up investments in areas connected to metropolitan areas for the first time,” Joe Biden explained.

“I am humbled by your confidence, and eager to do everything in my power to ensure that this administration succeeds. This administration can deliver policies and resources in transport that will create jobs, rise to the climate challenge, and equitably serve all Americans, all while continuing to ensure the safety of travelers and workers alike. Americans should not settle for less than our peers in the developed world when it comes to our roads and bridges, our railways and transit systems,” Buttigieg said at the ceremony.

Buttigieg said it will be “be the second biggest train enthusiast. Travel in my mind is synonymous with adventure, growth, and even love, so much so that I proposed to my husband, Chasten, in an airport terminal. Don’t let anyone tell you O’Hare isn’t romantic.

Buttigieg was an intelligence officer in the United States Navy Reserve who was deployed to Afghanistan in 2014, eventually earning the rank of Lieutenant. A native of South Bend, Buttigieg graduated from Harvard University and was a Rhodes Scholar at Oxford University.