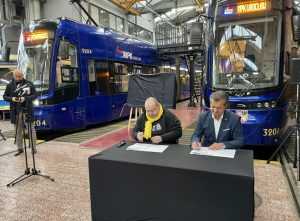 MPK Wrocław and Pesa signed a contract for the delivery of up to 40 low-floor Twist trams with a firm order for 24 new vehicles worth PLN 204 million (EUR 44.45 million). According to the contract, there is an option for 16 additional LRVs which will bring the total value of the contract at PLN 337.5 million (EUR 73.5 million).

According to the contract, the first tram especially designed for the capital of Lower Silesia will be delivered within two years. The 29-metre-long vehicles will be air-conditioned and will be adapted to the people with disabilities.

Thanks to the solutions used, the Twist LRVs for Wrocław will be one of the quietest LRVs in Poland which will also feature energy recovery system and batteries that enable driving in the event of a power failure.

“The development of public transport which includes the rolling stock modernisation is a priority for me as the president of Wrocław. We are in the process of implementing another contract for the supply of 46 modern trams,” Jacek Sutryk, the Mayor of Wrocław said at the signing ceremony.

The first low-floor Twist trams has been delivered to Wrocław in 2015 providing increased access and comfort for passengers. They were also the first Wrocław trams fitted with USB sockets for charging mobile devices with a metallic exterior layout.

In total, the city will see 86 new and modern trams worth PLN 710 million (EUR 154.7 million). They will all be equipped with air conditioning system and additional amenities for people with disabilities.

“We are glad that the Polish rolling stock manufacturer will become part of our ongoing tram fleet renewal, conducted under the auspices of the Mayor of Wrocław. Pesa will help us to replace the oldest two-car trams from the previous era,” Krzysztof Balawejder, the President of MPK Wrocław said.

In March 2021, the public transport operator awarded Modertans Poznań a contract for the supply of 21 additional trams under a framework agreement for 46 new Moderus Gamma trams.