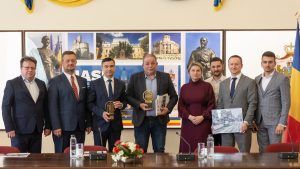 The Mayor of Romanian city of Iasi, Mihai Chirica, the Secretary of State in the Ministry of Regional Development and Administration, Claudiu Răcuci, and the President of Pesa Bydgoszcz, Krzysztof Zdziarski, have celebrated the completion of Swing tram fleet delivery which is part of modern tram fleet procurement project of the city.

For the project, in June 2020 the Iasi of City has signed with Pesa a contract to deliver 16 Swing trams and the first vehicle was sent on August 2, 2021, with a milestone tram delivery ahead of the contractual deadline. The first Swing tram entered operation on September 9, 2021 after all tests were successfully completed. The last vehicle has been delivered to the public transport authority CTP on December 20, 2021.

“16 Pesa Swing trams already run in Iasi and have a significant impact on improving public transport in our city. I want to thank the Polish company for the perfect implementation of the contract as well as for the quality of the vehicles which is already known by the inhabitants. The collaboration with Pesa and through the European financing the City Hall is providing its citizens a modern, green and smart public transport,” the Mayor said.

Under the PLN 130 million (EUR 28 million) contract, Pesa delivered the 30 metres long Swing trams with a total capacity of 240 passengers of which 60 seated. The trams have been equipped with modern air conditioning, monitoring, passenger information and diagnostics systems.

“I thank the city authorities and people involved in the implementation of this project for the trust and excellent cooperation here in Iasi. For us, this order was also important because it showed in practice the impact of the Pesa 2026+ Strategy we have adopted. We delivered high-quality vehicles ahead of schedule, achieving customer and passenger satisfaction,” the President of Pesa said.

The Swing tram fleet supply contract was implemented under the “Public Transport Development” programme carried out jointly by the local government of Iasi and the Ministry of Regional Development of Romania as part of the Integrated Urban Development Strategy 2015 – 2030 Iași and its Metropolitan Area.

In Romania, Pesa is currently implementing the contract for the supply of 17 trams in Craiova. The company has also submitted a bid in a tender organised by the Ministry of Regional Development for the delivery of 49 trams to three other Romanian cities and it also intends to offer electric multiple units to Romanian Railways. The Polish rolling stock manufacturer has also delivered its trams to Cluj and to other foreign customers such as Sofia, Kiev, Moscow and Szeged.