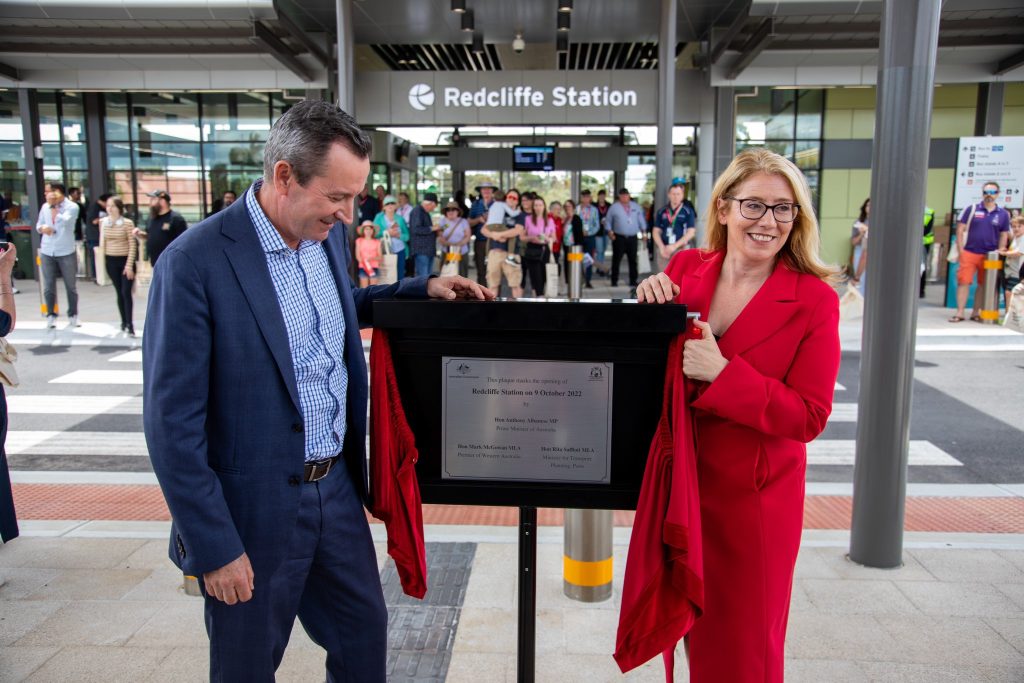 The new 8.5 km rail link is 8 km build underground crossing under the Swan River and Perth Airport, reaching around 27 metres below ground at its deepest point.

The train journey starts at Perth station towards Airport Central station crossing High Wycombe and Redcliffe stations which are providing drop-off bays and bike shelters. The three new stations – Redcliffe (9 km from Perth CBD), Airport Central and High Wycombe (east of the Forrestfield freight marshalling yard) – the new line links the eastern suburbs of Perth providing increased capacity. The new line is connecting the suburbs with the city centre via the international airport.

The Forrestfield line is linked with the bus services, connecting surrounding suburbs to the three new stations and is reducing the travel time by 50% from 45 minutes by car to 20 minutes from the city centre to the airport. The line will reduce the CO2 emissions by 2,000 tonnes each year.

“As a former Infrastructure Minister, I know how important affordable and accessible public transport is, and the Airport Line will open up new transport opportunities for residents and tourists. The Metronet programme of works is creating thousands of local jobs, and when complete will be a game-changer for Perth commuters,” Prime Minister Anthony Albanese said.

AUD 1.86 billion (USD 1.19 billion) was the value of the project being covered with AUD 490 million (USD 313.84 million) by the Commonwealth and AUD 1.37 billion (USD 877.5 million) by the State Government. “The Australian Government has committed AUD 3.7 billion to a number of Metroeet projects to ensure an integrated transport network that supports Perth’s growth and amenity – and as we can see here today, that’s exactly what we are delivering,” Federal Infrastructure, Transport, Regional Development and Local Government Minister Catherine King said.

In 2016, the Public Transport Authority awarded a joint venture of Salini Impregilo (80%, now Webuild) and NRW the design, construction contract worth AUD 1.17 billion (USD 753.2 million in current prices). The joint venture which constructed the two parallel tunnels, stations, 12 cross passages, and other related infrastructure, is also responsible maintenance services for the next 10 years.

Hitachi Rail has designed, tested and installed the signalling and telecommunication technology along the 8 km tunnel which will also benefit from access for all Carrier Mobile Services and a new 4G train communications system.

The new line is expected to make 20,000 daily trips in the first year of operation, with a train frequency of every 12 minutes in peak, every 15 minutes during the day and every 30 minutes at night. By 2032 the authorities estimate that the daily trips will increase to 29,000.

“Not only will this line increase public transport options for people living in Perth’s eastern suburbs and foothills area, but it will also create additional capacity on the Midland and Fremantle lines. The Airport Line will also support domestic and international tourism by providing travellers with another option to travel to and from the airport at a very affordable price,” Transport Minister Rita Saffioti said.

Perth Airport Link is the first one to join the network since the opening of the Mandurah Line in 2007, built and opened by the state government.

The project is part of the Metronet strategy which will increase the connectivity of Perth, relieving the pressure on capital’s road infrastructure. Metronet includes new projects totalling 72 km of new rail line and 22 new statins in Perth and its metropolitan area including the rolling stock programme under which the Bellevue plant has been opened in 2021 by Alstom which will deliver 246 new C-series railcars replacing the ageing A-series trains, and six new diesel railcars to replace the existing Australind service between Perth and Bunbury.