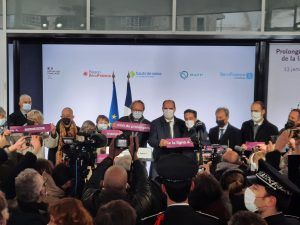 The French Prime Minister Jean Castex, and the CEO of RATP Catherine Guillouard have inaugurated the 1.8 km Paris metro line 4 extension from Mairie de Montrouge to Bagneux-Lucie Aubrac. The extension is served by two stations (Barbara and Bagneux – Lucie Aubrac) and a new 1500 sqm depot.

Between 2015 and 2019 civil engineering works were implemented covering the tunnel, walls and concrete slabs forming the ground and floors of the stations. During the pandemic, work has been performed for stations’ development covering the platforms, the installation of the furniture and equipment as well as the passenger access facilities.

Île-de-France Mobilités, and RATP are working to put the line in automatic operation expected to become operational from 2023. According to the plans, the line will be operated by 52 trains including 20 latest-generation trains – the MP14 vehicles.

The EUR 406 million project has been 60% financed by the Île-de-France Region, while the State covered 25.7% of the costs and 14.3% were provided by the Hauts-de-Seine Departmental Council.

87,000 inhabitants live in the communes of Montrouge and Bagneux, two southern suburbs of the French and with the new extension, 41,400 people live or work 600 meters from Bagneux Lucie Aubrac and Barbara stations, the latter one being intermediate station.

With the two new stations, Paris metro line 4 is now 14 km long with 29 stations providing transport links to other metro lines and to the RER system and from 2025 it will have connection with the future metro Line 15.

Along the metro Line 4 major projects are planned designed as offices, shops, homes, such as the ZAC eco-district Victor Hugo. Line 4 is the second busiest in Paris with 700,000 daily passengers before the pre-pandemic.