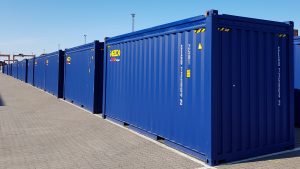 Estonian railway logistics company Operail has received 75 new bulk containers which will help to meet operator’s target to double the multimodal freight volumes to more than 200,000 tonnes by the end of 2020. In 2019, the company has moved a total volume of 100,000 tonnes of goods.

Compared to the previous year, the volume of Operail multimodal freight transport has increased by more than 50% in the first four months of the year, from 20,000 tonnes to 32,000 tonnes. “This shows that the need for this service is increasingly growing and the arrival of the new bulk containers allows us to further increase the volumes,” said Urmas Peterson, Head of Multimodal Transport at Operail.

In the first four months of 2020, Operail has transported almost 1,400 containers, reducing the load on Estonia’s main highways by 2,800 truck journeys.

Most of the goods have been moved in containers belonging to shipping companies. Taking the delivery of the 75 new bulk containers allow the company to increase its transport of bulk goods and to expand the train schedule as the freight volume increases. “Where currently two trains run per week, the new containers will make it possible to send out a train every day,” Peterson said.

Initially, granite gravel will be transported in the containers that arrived in Estonia from China, followed by grain in the second half of the year. As new product groups, Operail plans to bring such bulk goods as wood pellets, ash, cement, and more to the railway.

Currently, with the support of Operail’s multimodal freight service, mainly sawn timber, wood pellets, peat, crushed stone, and grain are being transported by railways. The open-roofs containers allow bulk cargo to be loaded with a front loader or other equipment, making the use of the containers more versatile. “The containers can be closed with a cover, protecting the goods from wind and rain, if necessary,” Peterson explaines.