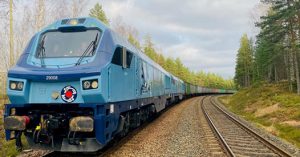 Operail, the Estonian national freight transport company, has launched its first freight train in Finland as it will be the main railway operator for Rauanheimo port operator transporting dry bulk on the Vainikkala – Koverhar route.

“International expansion is an integral part of our growth strategy and we are delighted to take the next step towards greater goals by starting operations in Finland. This is the moment we have been eagerly waiting for,” said Paul Lukka, Chairman of the Board of Directors of Operail Finland and a member of the Management Board of Operail Group.

Operail will be providing railway-hauling services from the boarder station Vainikkala to the port of Koverhar in Hanko.

“Operail will certainly perform well and perfectly complement VR Transpoint’s existing efficient service. These two railway operators, which are in a constant phase of development within their own niche areas, strengthen trade in Finland and our competitiveness on the world market,” Joakim Laxåback, the Managing Director of Rauanheimo said.

According to Laxåback, substantial volumes of dry bulk are expected to be transported by railway on the railway line between Vainikkala and Koverhar, and “in the long term a growing need for rail transport in the whole country, both in terms of domestic loads and transit,” is estimated.

In October 2019, Operail has announced its intension to expand to Finland rail market. To run the freight train in Finland, this summer, the transport and logistics company obtained the approval from the Finnish Transport Agency Traficom allowing Operail to provide rail transport services in Finland. The company will use nine Wabtec PowerHaul diesel locomotives to transport the cargoes. “We would like to thank the Finnish authorities and our partners for their professional, supportive, efficient and constructive cooperation,” Ilkka Seppänen, Managing Director of Operail Finland Oy said.

Operail intends to secure its position on Finland transport market, with plans currently being developed.