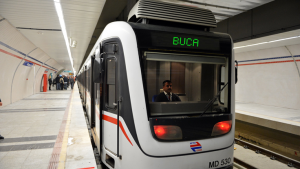 The European Bank for Reconstruction and Development (EBRD) has published the Project Summary Documents (PSD) for the construction of Buca metro line, part of the city’s urban rail network development to meet increasing demand, providing an environmentally friendly alternative to private vehicles.

The EBRD provided Izmir Metropolitan Municipality a EUR 80 million senior loan and the PSD is necessary to be prepared for each private and public sector project where approval is sought from the Board of Directors.

According to the bank, the project has an estimated value of EUR 652 million. Previously the project was estimated at EUR 754.5 million.

The Buca metro line project covers the construction of a 19.5 km metro line of which 13.5 km main line and a 6-km tunnel connection between main line and the depot area. The new line will have 11 underground stations, one depot and a workshop building.

The project is expected to be completed in 2023 and will have a capacity of 291.000 passengers per day.

In January 2020, the municipality has launched the tender for the new line, which is part of the third phase of metro project development in the city. The contract includes excavation works, concrete works, and electromechanical installations. The procurement is divided into three main components. the first one includes the civil works the line, stations, depot and the tunnel connection, as well as electromechanical installations.