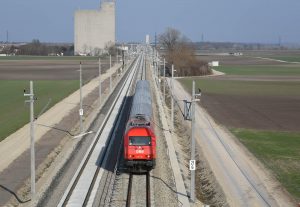 ÖBB is planning the expansion of Vienna-Bratislava line with the goal to shorten the travel time between the two capitals by more than 15 minutes and with 100 per cent green traction power.

The construction equipment is currently working on the modernisation of the stations and stops along the line, as well as on the electrification. While ÖBB is carrying out the double-track expansion between Siebenbrunn-Leopoldsdorf and Schönfeld-Lassee, planning for the full expansion is starting in parallel.

The completion of Schönfeld-Lassee rail project is planned for September 2022.

“Modernised train stations and stops will be available along the route, and all level crossings will be replaced by underpasses or overpasses. With the start of planning for the full expansion, we are going one step further and are raising the line capacity to a new level,” Franz Bauer, Board Director at ÖBB-Infrastruktur said.

The construction of a rail section between Vienna and Marchegg (in the district of Gänserndorf, Lower Austria), at the Slovakian state border, is ongoing as at the end of March, the so-called rapid conversion train carried out the works from Schönfeld-Lassee station towards Siebenbrunn-Leopoldsdorf station and laid the second track over a length of more than 5 km in just a few days. The Raasdorf and Untersiebenbrunn trains station have modernised in 2020, and the modernisation of Glinzendorf, Siebenbrunn-Leopoldsdorf and Breitensee stations will be completed in the autumn of 2021.

More than half of the overpasses and underpasses along the route are also already completed and open to traffic, while the work for an underpass and overpass in Lassee will start this year.

ÖBB is approaching the full expansion of Vienna-Bratislava line, with the first phase of the project being implemented between September 2016 and December 2018. Since then, the trains have been double-track and electrified rail connection from Vienna Stadlau to the newly built station Vienna Aspern Nord, and the passengers benefit every half hour rail service on the S80 line between Vienna Central Station and Vienna Aspern Nord. Work in the Lower Austrian section has been ongoing since August 2018.