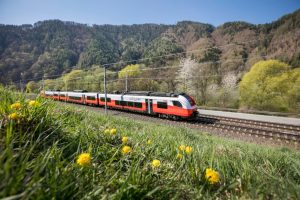 ÖBB has launched a tender for up to 540 electric multiple units (EMUs) in two different length variants which are able to run at a speeds of 160 km/h. The interested companies must submit their bids until June 11th, 2021.

The tender calls for the supply of 270 105 – metre-long EMUs and 270 73 – metre-long trains. The framework contract covers the option for the provisioning of maintenance services for the new trains.

Under the 10 – year contract, the options are expected to be called by ÖBB Holding AG, City Air Terminal Betriebsgesellschaft m.b.H. (CAT, which is providing rapid connection between Vienna’s city centre and the airport), Graz-Köflacher Bahn and STA – Südtiroler Transportstrukturen, the South Tyrolean Transport company.

According to the tender, there is a limited number of companies which can be invited, and it cannot exceed 7 candidates, and ÖBB will start the negotiating procedure with prior call for competition.

This year, ÖBB has announced its 2026 investment plan with a total value of EUR 25 billion, of which EUR 3.4 billion will be allotted for the modernisation and procurement of passenger trains, including night trains for the expansion of its Nightjet network.

The Austrian rail company signed a EUR 1.5 billion framework agreement for the supply of more than 700 passenger cars expected to be delivered in the next five years. In addition, with the German rolling stock manufacturer, ÖBB agreed in 2020 for the supply of 11 Cityjet trains expected to be delivered by the end of this year, bringing this train fleet to 200 trains.

As part of the fleet renewal programme, ÖBB and Bombardier, which now is part of Alstom, signed a EUR 188 million contract for the delivery of 25 six-car Talent 3 electric multiple units. This was an exercised option under a framework agreement signed in 2016 for the supply of up to 300 trains. The delivery of the trains was expected for 2020 and 2021, which is currently delayed.