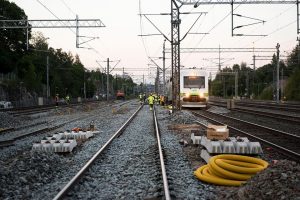 The NRC Group won contracts with a total value of EUR 22.7 million for railway projects in Finland and Sweden. The Finnish Transportation Infrastructure Agency awarded a EUR 16.1 million railway maintenance contract while the Swedish Transport Administration selected the company for the construction of a new station, under a EUR 6.6 million contract.

In Finland, NRC Group will be responsible for preventive maintenance and corrective measures on the track lines and will include rail services such as track and signalling systems. The maintenance area is situated in Northern Finland, from Kokkola and Äänekoski in the south up to Oulu, Kontiomäki and Vartius in the north.

Works are scheduled to commence in November 2020 and are expected to be completed in October 2023. Under the contract, there is a two-year option period for maintenance services.

“This is an important win for NRC Group in Finland. Strengthening our position within railway maintenance is a strategic priority for NRC Group and an important step towards becoming the most attractive partner and employer for tomorrow’s infrastructure”, the CEO of NRC Group, Henning Olsen, said.

In Sweden, the company is responsible for the construction of a new station at Lustån, located on the railway line between Avesta and Hedemora.

The contract with NRC Group will involve rail services such as track, electro, signalling and telecom as well as groundwork.

Works will start in June and the project is scheduled for completion in August 2022.

The NRC Group develops and supplies services to build sustainable transport solutions in the Nordics.

In the last three years, the NRC Group won contracts for other railway projects in the two countries which are ongoing.

In Sweden, the company is constructing a 560m tunnel and a 120m service tunnel part of the Kvarnberget West Link under a SEK 820 million (EUR 78.3 million) contract. The project is 47% finished and is expected to be completed in December 2021.

The company is also involved in the Haga Västlänken Gothenburg project under a SEK 2.3 billion (EUR 219.6 million) contract. A 1500m tunnel, including the Haga station, under the Haga church in central Gothenburg. In the north, the project joins stage Kvarnberget and in the south to Korsvägen. Another 900m tunnel leading out to Linnéplatsen will be also constructed. The project will be completed in December 2026.

Ongoing projects in Filnland include the Tampere tram which will be completed in 2021, the Jokeri light rail, expected to enter services in 2024. The railway infrastructure constructions also include the Mansikkakoski railway bridge over Vuoksi river (eastern Finland), part of Luumäki‒Imatra railway project.