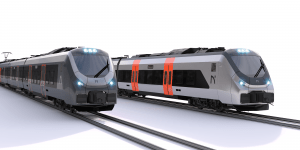 Alstom will deliver Norske Tog 200 commuter trains as the Norwegian company ordered an initial batch of 30 vehicles worth NOK 4.2 billion (EUR 413.84 million). The framework agreement includes an option for up to 170 additional trains.

The trains’ production will start in 2023 and the first trains are expected for testing in Norway in 2024. The first 30 Coradia Nordic trains will enter passenger operation in 2025 on the Østfold Line providing more comfortable train journey.

“The new commuter trains will give a long-awaited boost to train commuters in the Oslo region, with higher comfort, increased capacity and better coverage. Now we can finally replace the 40-year-old trains,” Øystein Risan, the CEO of Norske Tog said.

The new Coradia Nordic train meets all requirements related to capacity, customer satisfaction and technical solutions. The train’s total capacity is 778 passengers, which is an increase of about 40% compared to the trains being replaced.

The EMUs will provide 294 seats, compared to the currently trains which offer between 238 and 303 seats. The seats will be very comfortable and are set up in a 2+2 seat arrangement with a wide aisle throughout the train.

Large flexi-zones make the vehicle a suitable commuter train by allowing passengers to transport bikes and strollers and have large areas for standing during rush hour.

The new trains have a universal design with a low floor at all entrances, which allows all passengers to walk straight onto the train. The train has hearing loops in all carriages adapted for passengers with disabilities, and others. Each train has a toilet for wheelchair users and fixed spaces for wheelchairs. The trains also have wheelchair lifts, which allow the train to operate at platform heights as low as 550 mm.

The Coradia Nordic vehicles have a well-proven track record and is specially designed to cope with harsh Nordic winter conditions. They are also operating on Sweden’s rail network for more than 15 years and has undergone continuous development during production. In June, DSB and Alstom signed a contract for the delivery of 100 Coradia Stream trains.