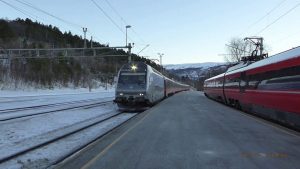 Norske tog has announced its intention to acquire new long-distance trains to operate the Dovre, Sørland, Bergen and the Nordland railway routes. They will replace the current trains when they approach their expected technical life and strengthen the Norwegian train service in line with the Railway Directorate’s estimated growth.

The railway company, which owns and manages the rolling stock fleet for rental for passenger train operators, plans to acquire up to 100 long-distance trains which will also provide night train services.

The new trains are expected to be put into service in the period 2025-2033. According to the company, the trains operating on the Bergen line must be replaced first.

For the procurement, Norske tog wants dialogue with and input from interested parties to develop a requirement specification that replies to the needs and wished of different stakeholders and user groups.

A meeting will take place on October 28 in Oslo to develop together with the participants the requirements of the new train fleet. The attendance is limited to 50 participants and will be organised considering the current infection control rules. The meeting will be live streamed, providing the attendees to ask questions to the presenters.

Norske tog intends to renew its entire rolling stock fleet. The company has issued call for tenders to acquire 200 new commuter trains with an initial call for 30 trains. The remaining fleet comprising up to 70 additional trains is part of company’s option. The 30 new commuter trains with large capacity to replace the existing Class 69. In May, Norske Tog has announced it has pre-qualified six train manufacturers with the contract expected to be signed in 2021. Starting 2024, the trains will operate the Ski – Oslo – Stabekk rail route.

The company is also renewing its Class 72 train fleet manufactured by AnsaldoBreda. A tender was launched to mid-life upgrade and prolong the estimated lifetime for the trainsets. Five qualified suppliers have been invited to submit a final offer by 21 September 2020, but the deadline was extended due to Covid-19.