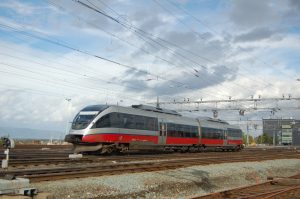 According to a new study of the Norwegian Railway Directorate, the best solution to reduce the greenhouse gas emissions is the replacement the diesel trains with battery vehicles, combined with partial rail electrification.

The study was conducted from January to December 2019 and was made with the collaboration of Norske Tog and Bane NOR and vehicle manufacturers.

All these options were evaluated on the basis of finding a climate-friendly cost-effective and feasible solutions to be used in the near future.

Following all investigations, the study concludes that the battery-based technology is most relevant for being a sustainable and robust solution for replacing diesel trains. To take up this technology and eliminate diesel traction, including on the Nordland line, it is necessary to combine the use of batteries with a charging system that can charge trains while driving. This means that battery trains with part electrification is recommended as the main solution to replace the use of diesel traction. “This concept is also compatible with today’s technology and can therefore be used on the entire existing railway network,” the Directorate concluded.

Norway has committed to cut by 45 per cent of greenhouse gas emissions by 2030. As the transport sector accounts for 30 per cent of total emissions, the Directorate has performed the Emission Solutions for Non-Electrified Railways study (NULLFIB).

As of 2019, five country’s railway lines are nor electrified and are operated by diesel trains which results in greenhouse gas emissions. A transition to zero-emission will reduce the railways’ carbon footprint and will provide favorable socio-economic savings. At the same time, this will also increase the competitiveness of the railways in conjunction with other transport modes.

The study says that the technological developments within zero-emission solutions are very fast. This means that the railway transport must be adequately equipped for an increase in the number of passengers and goods volume and in the same time, to drastically cut the emissions.