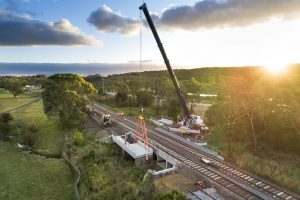 John Holland has completed the upgrade of the North East Rail to ensure a smoother, safer ride for passengers travelling between Albury–Wodonga and Spencer Street Junction in Melbourne.

The company modernised 532 linear track kilometres months ahead of schedule and which allowed the completion of additional works on behalf of Australian Rail Track Corporation (ARTC). Between July and November 2020, the works have been accelerated comprising additional turnout renewals and more than 30 extra bridge deck conversions. Works will continue this year to modernise the signalling system.

“The works bring the rail line up to a Victorian Class 2 track performance standard, which is in line with other regional passenger rail lines in Victoria, including accommodating new VLocity trains on the line,” said the Deputy Prime Minister and Minister for Infrastructure, Transport and Regional Development Michael McCormack.

The benefits of the implementation of the project result in more than AUD 70 million investment in the regional North East Victorian communities and since the start of the works, 173 Victorian businesses and service providers were involved.

The completion of North East Rail upgrade project improves the passenger service reliability by upgrading track condition and addressing the main causes of delays as well as the service quality and comfort for travelers by reducing bumps experienced during travel. The project also reduces the causes of major delays that can impact services such as signal failures due to signal wire theft.

The project is fully funded by the Australian Government through the Australian Rail Track Corporation. The government has committed AUD 235 million (USD 178.6 million) to upgrade the entire line from Melbourne to Albury and Wodonga. The improvements will bring the North East line up to a Victorian Class 2 track performance standard, in line with other long-distance regional rail lines in Victoria.