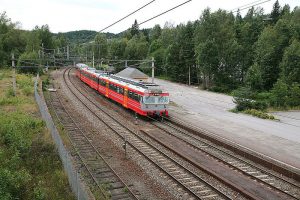 Six companies have been pre-qualified for Norske Tog train procurement process which envisages the supply of 200 commuter trains, with an initial order for 30 trains and an option for up to 170 additional train sets.

The six companies to submit tenders are:

According to the Norwegian rolling stock company, the price, the opportunities for shorter station stops, high acceleration and braking capabilities will be considered under the competition. The bids are expected to be submitted in October and at the beginning of 2021 the contract is expected to be signed.

The new trains to be acquired under the Norske Tog train procurement are expected to be delivered in 2023 and they will replace the current commuter train sets, Class 69, operating on L2 Stabekk – Oslo – Ski railway route. The new modern trains will run at top speed of at least 160 km/h, “preferably up to 200 km/h.”

“Norske Tog is very pleased with the interest from the supplier market. In the pre-qualification round, we have especially emphasized adequate experience from similar projects relevant to our acquisition, and sufficient financial strength for implementation. We are now proceeding with a relatively high number of suppliers, to get the best competition possible,” Øystein Risan, the CEO Norske tog, said.

The new Class 77 commuter trains will have a maximum length of 110 metres, which will be 33-m longer than the existing rolling stock fleet operating the L2 Stabekk – Oslo – Ski line. The Norwegian rolling stock company estimates that the trains will have a capacity of 700-800 or more passengers in each train set compared to the current capacity of 570 standing and seated passengers.

The new trains will offer better capacity, greater comfort, and digital connections being equipped with systems for onboard mobile coverage. “It is all about making it better and easier for the commuters,” Risan said.