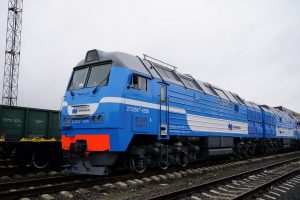 The delivery is part of a locomotive supply contract signed in May 2021.

The diesel locomotives will replace the company’s existing 2TE116 series locomotives that have been operating in the Norilsk industrial region for more than 30 years. The power of the new locomotives is 15 percent higher compared to the locomotives being replaced, the traction force when starting off is increased, which is especially important in winter conditions, with snow drifts.

Norilsk Nickel ordered the locomotives to meet transport demand and also associates the commissioning the vehicles with the increase of cargo turnover and work and consumption efficiency.

The 2TE25KM is a two-section diesel locomotive with AC-DC electric transmission. It is designed to haul heavy freight trains, ensuring constant horsepower regardless of any external factors. Such locomotives are widely used on the Russian Railways network and are in demand among large Russian and foreign industrial companies engaged in cargo transport due to their high technical and economic performance.

The advantages of these mainline freight diesel locomotives include easy maintenance and repair activities, a modern control system, ensuring traffic safety, and comfortable working conditions for locomotive crews. The driver’s cabins are equipped with an autonomous heater, refrigerator, and microwave, as well as a heated washbasin and an environmentally friendly closed toilet.

More than 550 locomotives of this series have already been produced at BMZ, which are operated today in Russia and abroad. The 2TE25KM locomotives are part of the fleet of Russian Railways, BaltTransService, and are operating on the Ulan-Bator railway in Mongolia, at the Tugnuisky open-pit mine in Buryatia, at the Sokolovsko-Sarbaisky mining and processing production complex in Kazakhstan and at the Navoi Mining and Metallurgical Combinat in Uzbekistan.