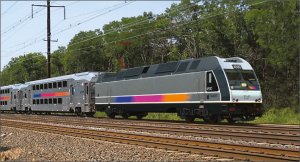 New Jersey Transit Corporation, NJ Transit, will acquire 8 additional ALP-45A Bombardier dual-powered locomotives under a USD 70.5 million contract. The first locomotive is expected to be delivered in the first quarter of 2022.

In addition, the ALP-45A is able to operate in electric mode whenever overhead catenary is available, which is more cost-effective and environmentally-friendly than diesel operation.

The ALP-45A locomotives will replace some of the older PL-42AC series diesel locomotives of NJ Transit fleet. Replacing a Tier I locomotive with a Tier IV locomotive can result in an estimated emissions reduction of 52.0 NOx tonnes annually which supports NJ Transit’s goal of a reduced carbon footprint.

Other benefits of the ALP-45As are self-rescue capability by changing power modes, redundancy by having two engines instead of one, improved diagnostic capabilities and an upgraded pneumatic system.

The ALP-45A locomotives are designed to operate push-pull passenger train service on both electrified and non-electrified lines at speeds of up to 200 km/h in electric mode and up to 160 km/h in diesel mode. The locomotives will meet the current EPA Tier IV requirements, reducing emissions compared to the locomotives to be replaced when operating in diesel mode, and producing no emissions when operating in electric mode. The ALP45A offers an increase in horsepower, acceleration and available head-end power over the locomotives they will be replacing.

The new order is in addition to the 17 locomotives procurement approved in December 2017 bringing the total number of new ALP-45A Bombardier dual-powered locomotives approved in recent years to 25 vehicles.

In 2008, NJ Transit Board approved a contract with Bombardier Transport for the delivery of 26 ALP-45 dual-powered locomotives, with an option for up to 63 vehicles. In 2009, the company has purchased nine additional locomotives increasing the total number of ALP45 vehicles at that time to 35. The first locomotive was delivered in December 2011.