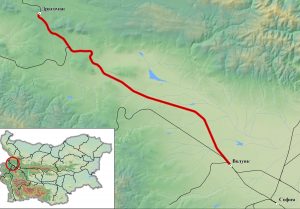 The tender is split into two lots, with the first one comprising of the design, construction and supervision of Voluyak – Petarch section and the second one is relating to the Volujak – Dragoman section.

The project on the modernisation of Sofia – Dragoman – Serbian border line, Volujak – Dragoman section will be con-financed by the European funds. BGN 345.9 million (EUR 176.8 million) is the estimated value of the project.

The section Volujak – Dragoman is single-track, with a length of approximately 35 km. the project includes the reconstruction of the track to allow a 160 km/h train speed, the installation of the signalling and telecommunication system, the construction of new overhead contact line system and adaptation of power substations in Aldomitrovtsi and Volujak and the construction of a new station building in Slivnica.

The line is part of the TEN-T core network crossing Dragoman (Serbian border) to Sofia, Plovdiv, Burgas/Svilengrad (at Turkish/Greek border). Sofia-Dragoman railway line is part of South-East Axis, the extension of the major TEN-T axes to the Neighbouring Countries. This is also the main direction between Europe and Asia and part of the Orient/East-Med CNC. On the Serbian side, the line extends to the Niš-Dimitrovgrad line.