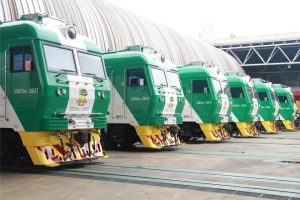 CRRC Qishuyan has started the delivery of the second batch of 11 new diesel locomotives to Nigeria of which 9 will be used for rail freight transport and two shunting locomotives.

The first CRRC locomotives to Nigeria were unveiled in October 2019, when the Chinese manufacturer announced the beginning of construction works for the second batch of vehicles.

The new rolling stock provided by CRRC are used on the 187 km Abuja- Kaduna standard-gauge railway line and will also enter operation on the 156 km railway connection between Lagos and Ibadan expected to be opened this year.

For rolling stock development, in November, the national authorities have inaugurated the construction works for an assembly plant in Kajola, southwestern Nigeria. The project is carried out under a partnership between China Civil Engineering Construction Corporation (CCECC) and the government. The assembled wagons will be used on the two railway lines as well as for the central railway connections in the country. At the plant, the wagons are also targeted to be delivered to other countries in West-African sub-region.

Nigeria has a strong collaboration with China for railway development. In October 2019, the country’s government and China Railway Construction Corporation signed a USD 3.9 billion for the construction of Abuja – Itakpe – Lokoja railway line, including the stations along the route. The PPP contract involves the Exim Bank of China covering 75% of the costs, while the Chinese company, 10%, the remaining investment being provided by the government.