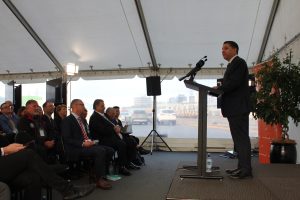 The Transport Minister Michael Wood and State-Owned Enterprises Minister David Clark have unveiled in Wellington the New Zealand Rail Plan, an important strategy for a sustainable rail network that supports our economic recovery.

The ten-year plan highlights the way New Zealand can build a resilient, reliable and safe network, as well as the indicative investments over the next decade.

“The disruptions to the supply chain due to COVID have shown how important it is to have a reliable rail network to keep freight flowing, which keeps our economy moving. The Rail Plan shows how we’re getting rail back on track after the former government let it slide into managed decline,” Michael Wood said.

Annually, rail transport provides up NZD 2.1 billion (USD 1.5 billion) in value to New Zealand economy and reduces the emissions and congestion. It eliminates 2.5 million tonnes of CO2 and 26 million car trips in Auckland and Wellington areas.

The Rail Plan proposes a new long-term planning and funding framework and the priority investments which include the national rail network and the metropolitan network.

“The beauty of the Rail Plan, and the related work programme, is that for the first time KiwiRail has certainty about investment in the network. Together, the Rail Plan and the RNIP will support infrastructure pipeline certainty, more effective investment decisions and a reliable and successful service for growing freight and passengers,” KiwiRail Group Chief Executive Greg Miller said.

Currently, the KiwiRail is developing a three-year investment programme for the rail network (RNIP) which will be the basis of funding requests through the National Land Transport Fund.

As rail transport plays a major role transporting New Zealand’s exports, the network must be prepared to meet future demand which is estimated to increase by 40 per cent in 2052, when is expected to reach 400 million tonnes. The strategy focuses on the investment to restore the rail freight transport to provide freight customers improved services and capacity along with an efficient rail network.

At the end of 2019, the government has unveiled the draft of the rail strategy which underlined the importance of a new long-term planning and funding to modernise the country’s network.