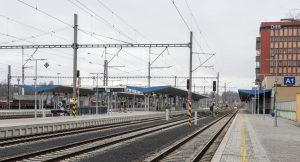 Správa železnic, the Czech railway infrastructure manager, is discussing with the Ministry of Transport on the eight proposals for the reconstruction and modernisation of the existing stations.

CZK 376 million (EUR 13.5 million) is the total value of the programme which includes stations across six or seven regions.

It is expected that the tenders will be launched for construction works and design preparation as well as the acquisition of a building permit.

CZK 67 million (EUR 2.4 million) will be invested for the revitalization and renovation of the train station in Bečov nad Teplou. Due to the station position in a historically protected city zone, builders will concentrate also on cultivating local environment including the adjoining park. The project would start in 2022 and is expected to be completed within one year.

A new passenger building will be constructed in Chodov, involving a CZK 35 million (EUR 1.6 million) investment. The new building will be constructed at the underpass exit. Passengers will have at their disposal a waiting room, cash desks and barrier-free lavatories. The investment also includes building a parking place for passengers right in front of the new passenger building. The project will be finished in 2023.

In Bílina, CZK 54 million (EUR 1.95 million) will be used to completely renovate the station for its future optimal use while preserving current construction dispositional arrangement. The building’s interior will be completely reconstructed, barrier-free lavatories will be built for passengers, as well as barrier-free access into the underpass leading to platforms.

This year, construction works are expected to start for the construction of a new passenger station in Dětřichov nad Bystřicí. During the construction, the original passenger building will be demolished and a new one will be built, with both waiting amenities for passengers and for railway operation employees as well as the necessary technology. Conditions for parking and standing off bicycles will be improved. Investment costs are approximately CZK 27 million (EUR 971 thousand).

EUR 935,000 (CKZ 26 million) will be used for the modernisation of the train station in Valšov, where the reduction of the current building and the demolition of the 2nd floor is planned. Besides a background for passengers, the remaining part will also include the deployment of signalling technology. The whole building will be completely reconstructed and besides greenery recultivation, conditions for parking and standing off bicycles will also improve in its surroundings. The implementation of this project is planned for 2021 -2022.

A complete renovated station is also planned in Světlá nad Sázavou under a CZK 47 million (EUR 1.7 million) investment. The facade is going to be reconstructed as well as internal installations, and the current amenities for passengers and carriers’ services will be changed as well. The construction will also deal with a possibility of standing off bicycles into boxes for cyclists. The building, which is a listed historical monument, will be modernised in 2021 – 2022.

CZK 31 million (EUR 1.1 million) will be used for train station in Moravský Beroun. A reduction of premises is planned within the building with a subsequent complete reconstruction of the preserved part which will allow building a new adequate background both for the infrastructure manager or carriers and especially for passengers. The investment will also include car parks and standing off bicycles near the building.