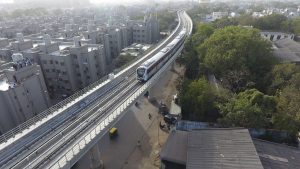 Gujarat Metro Rail Corporation has launched the tender for the construction of 11.6 km elevated viaduct of the first phase of the Surat metro rail project. Interested companies can submit their bids until August 31, 2020.

The tender envisages the construction of the elevated viaduct from from Kadarsha Ni Nal to Dream City, the upcoming business district in Surat, which includes a ramp for the depot and 10 stations.

The company has launched on July 16 the tenders in a single stage two package for the preparation of financial feasibility report for a 40.35 km of metro system with 38 stations, part of Surat metro project which also includes two depots, one in the Dream City and the other one in Bhesan.

The Line 1 will have a length of 21.6 km of metro line, constructed between Sarthana and the Dream City and served by 20 stations. 15 km of elevated line with 14 stations and 6.5 km underground section with 6 stations will be constructed on the route.

On July 10, the Gujarat Metro Rail Corporation published the tender for the design, construction and completion of the underground stations and the twin tunnel between the Surat railway station and south ramp which includes three underground stations –Chowk bazar, Maskati Hospital and Surat railway station. The works are estimated at USD 125.7 million (INR 942.16 crore) are expected to be completed in 40 months.

At the same time, a new tender was launched for the design and construction of the twin tunnel and stations from UG Ramp Kapodra to Surat railway station. The section includes three stations – Kapodra, Labheshwar Chowk and Central Warehouse.  The works are estimated at USD 124 million (INR 929.46 crore) and are expected to be finished within 40 months.

The 40 km Surat metro rail project was approved in March 2019 and is expected to be completed in 5 years.