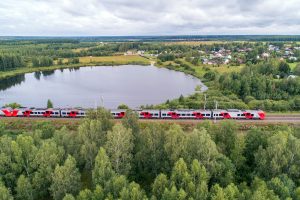 Oleg Belozerov, the CEO of Russian Railways, is supporting the new rail technologies that will shape the future of this transport mode, commented that the digitalisation, containerisation and high-speed and driverless trains are the main components of an environmentally friendly transport system. His statement was made during 24th St. Petersburg International Economic Forum (SPIEF).

According to Belozerov, railways remain in high demand and in the future will continue to hold a key position in the transport framework of the Russian economy. “Today we understand what the railways need to do in order for the country to develop much faster,” Oleg Belozerov said, who went on to emphasise the role of the creation of the high-speed rail network.

“High-speed rail projects are very profitable because they create huge multiplier effects and save people time. This is then translated into the incomes of the regions, budgets, railways and, most importantly, the people,” said the head of Russian Railways.

In the future, Russian Railways would strengthen its position as the most environmentally friendly form of transport which will be driven by the new projects to develop this transport mode and by the new rail technologies. The company’s development is based on the principles of ESG (Environmental, Social, Governance).

As an example of an environmentally friendly approach, Oleg Belozerov mentioned the energy savings. RZD is recovering the energy from its locomotives that “return it to the contact network when braking. As a result, 6 per cent of the energy consumed is returned back, enough to supply the Pskov, Novgorod or Magadan regions,” Belozerov said.

The most environmentally friendly and energy efficient projects belong to Moscow, especially the trains running on the Moscow Central Ring that also provides metro connections to 20 stations and to 9 railway stops in radial directions.

Belozerov stressed that the development of rail transport was a way to solve many environmental problems, including achieving the goals of the Paris Climate Agreement. Environmental issues are therefore one of the important areas of cooperation between the Russian Railways’ Holding and its French colleagues. Within the framework of the joint Road Map, the key issues are driverless trains, the use of hydrogen energy sources and the use of other alternative green technologies in rolling stock.