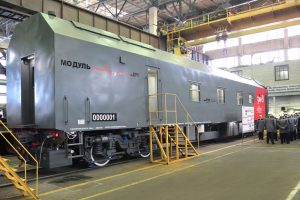 Following the agreement between the two companies, by the end of 2022 RZD will receive 447 units of rolling stock out of which 250 innovative hopper batchers, 197 technical support and maintenance modules, including 64 new-type modules of various configurations.

At present, 102 units of special equipment have already been sent to the Central Directorate of Infrastructure of Russian Railways.

“This year, the list of track equipment supplied for our strategic partner was replenished with two newest developments at once,” Kirill Epshtein, the Director of the Maintenance Vehicles Division and General Director of RPM Group said.

The new products include a hopper-dosing machine with increased carrying capacity and the MTSO-2 vehicle which ensures the transport of the track maintenance staff to remote areas and also provides on site living accommodation.

The innovative hopper batcher model 19-6940manufactured by Yaroslavl plant Remputmash – part of the RPM Group, an asset of the Sinara Transport Machines Holding – is a self-unloading wagon with a carrying capacity of 75 tonnes on bogies with a load of 25 tonnes per axle. The new model has a capacity increased by 5 cubic meters and a higher load capacity by 5 tonnes compared to the serial VPM-770 hopper batcher. In addition, in this configuration, the mileage before the first scheduled repair is more than doubled – from 210,000 to 500,000 km.

The MTSO-2 module is built using a new type of bogies that provide a smoother ride. The special car has an increased level of comfort for Russian Railways employees. The technical characteristics of the module have also been improved. The design speed of the car has been increased to 120 km/h, and the overhaul intervals have been increased by more than one and a half times compared to the previous model. MTSO-2 is produced at the Kaluga Plant Remputmash and at its branch at the Lyudinovo Diesel Locomotive Plant, in the city of Lyudinovo.