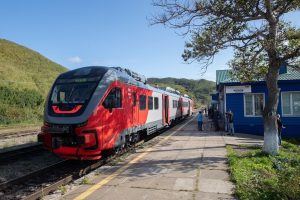 Transmashholding will deliver the passenger company Sakhalin three Orlan diesel trains of which two 3-car trains and one two-car train.

According to the contract, the transport operator will receive the new trains by the end of October.

The Orlan diesel trains of RA-3-type have increased number of seats compared to its predecessor RA2 model. The two-car train has a capacity of 133 seats and in the three-car version, it has 229 seats.

The trains have a new interior design including a salon meeting modern requirements of aesthetics, fire and sanitary safety. The salon and the cabin of the driver are equipped with a climate control system with air disinfection modules, including viral infections.

A new console with a convenient arrangement of the controls was designed for drivers. The head carriage provides special places for passengers with reduced mobility such as wheelchair lifts, accessible bathrooms as well as universal sanitary complexes.

They are equipped with new passenger information systems displaying the route, with a video surveillance system, as well as fire and security alarm.

The train service life is 40 years.

This train is the newest product development of Transmashholding that has completed its design and construction in 2019. Engineers designed its interior focusing on passenger’s comfort. RA-3 preliminary and certification trials started in March 2019 at the VNIIZT test circuit in Scherbinka.

The modern passenger train is designed to operate on non-electrified railway sections. They are an excellent solution for urban, suburban and interregional transport services on the railways with both low and high platforms.

Metrovagonmash, part of Transmashholding is the manufacturer of the trains which are produced at TMH Mytishi plant, in Moscow Region. To date, it has handed over 44 Orlan RA3 trains that run on more than 10 railway routes in different regions of Russia.