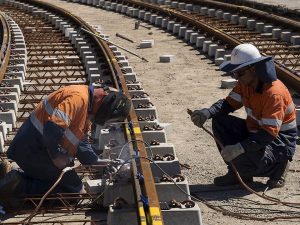 Major modernisation works have begun for Melbourne tram Route 58 , on the inner north section, creating a more reliable and comfortable journey for passengers.

AUD 3.7 million (USD 2.4 million) is the value of the modernisation works which include the replacement of 1.2 km of tram tracks, upgrades to overhead wires, and works to underground cables.

“We’re getting on with these works so we can give passengers better services and get them where they need to go. Route 58 is one of our busiest tram routes and these upgrades will mean the system can cope with that demand,” Minister for Public Transport Melissa Horne said.

At the beginning of this year, Public Transport Victoria (PTV) and Yarra Trams, the operator of city’s tramway network, launched the modernisation works on Route 58 by upgrading the Melville Road, Pascoe Vale South which will improve the accessibility.  The works included a 33m platform that aligns with low floor trams, the installation of new passenger information displays, shelter, seating and lighting system, dual tracks to allow trams to turn around more efficiently. The project will contribute to future running of newer, bigger trams on Route 58.

Melbourne Route 58 tramway route offers transport connections to Melbourne CBD to the tourist and cultural facilities such as Melbourne Zoo, Queen Victoria Markets and the Shrine of Remembrance. It also allows transport links with key health services such as the Royal Children’s Hospital, Royal Melbourne Hospital and the Peter MacCallum Cancer Centre.