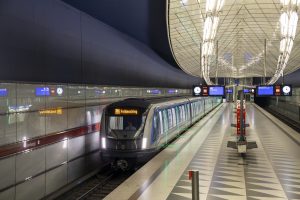 The technical supervisory authority TAB of the government of Upper Bavaria has issued the relevant permits for the commercial operation.

Initially, the two new vehicles will be used on the U2 line, and the future metro trains will be deployed within the coming months.

The next step is to open the U1 section between Mangfallplatz and Olympia shopping center which will be operated by the new metro trains. The application documents required for this are currently being prepared. The C2 trains can therefore initially be used on the U1/U2 and U3/U6 lines. The U4/U5 lines will follow successively.

Stadtwerke München (SWM) the Munich City Utilities company is gradually renewing MVG metro train fleet. By 2024, 67 new type C2 metro trains will be delivered to operate city’s metro system. 28 trains are already in transport services on the U3 and U6 lines.

In 2010, Siemens Mobility was awarded a contract for the delivery of 21 new six-car trains including an option for additional 46 trains. Following the order of the first option for 24 trains in September 2016 and the second option for 22 trains was ordered this year.

The design of the new metro trains is based on the popular predecessor vehicles. They are equipped with video cameras, passenger TV, and innovative LED interior lighting.

The C2 trains that offer passengers high level of comfort, provide a 10% increased capacity compared to the generations of the vehicles. The total capacity of the train reached 940 passengers, including 220 seats.

The six-car trains will successively replace the existing metros of Stadtwerke Munich, which have been in service for more than 40 years. The six-car trains are manufactured and statically pre-tested at the Siemens Mobility plant in Vienna.

With more than 1 million passengers per day, Munich metro is the most widely used transport mode in the Bavarian capital. The city’s metro system has a length of 100 km.