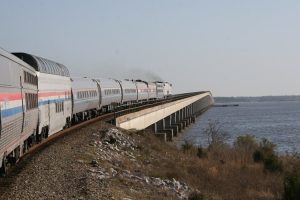 USD 12.57 million is the largest grant and it was awarded to Wisconsin Department of Transportation for Twin Cities-Milwaukee-Chicago intercity rail service project that involves the introduction of a second additional daily roundtrip train between Union Depot in Saint Paul, Minnesota, and Union Station in Chicago. These endpoints are currently served along Amtrak’s Empire Builder long distance service and by this new additional train, the passengers will have more reliable service between the two destinations. The proposed service will make 12 station stops of which three in Minnesota, seven in Wisconsin and two in Illinois. The project supplements the existing Empire Builder and Hiawatha routes with passenger rail service approximately four to six hours apart from the existing Empire Builder schedule and increases intercity transport options and connectivity for rural communities between St. Paul and Milwaukee.

In terms of value, Southern Rail Commission ranks second, with a USD 5.45 million grant awarded for the revival of the intercity rail passenger service along the Gulf Coast with state-supported Amtrak service from New Orleans, Louisiana, to Mobile in Alabama. The project will provide railway connection to the underserved regions, fostering the economic development and enhancing the connectivity within the Gulf Coast region. In addition, the reestablishment of the service will fill a critical geographic gap in Amtrak’s national network. The Gulf Coast region was previously served by tri-weekly Amtrak’s long-distance service and due to Hurricane Katrina, Amtrak has suspended the service between New Orleans, Louisiana, and Orlando, Florida in 2005. The two daily round trips will serve six stations of which one in Louisiana, one in Alabama and four in Mississippi.

USD 4.4 million grant was awarded to Connecticut Department of Transportation for CTrail- Hartford line enhancement project. It envisages the introduction of two additional weekday trains between New Haven and Springfield, on the CTrail service. Currently there is a one hour and 44-minute gap between the morning trains departing from Springfield and a one hour and 40-minute gap between morning New Haven departures. CTrail, which is operated by TransitAmerica Services, runs eight weekday trains between New Haven and Hartford with three trains continuing to Springfield. The project will allow more connections with Metro-North and Amtrak trains. The project also includes adding a customer service representative in Hartford Union Station to enhance and ease passengers’ experiences with ticket vending machines and access to and from the platform.
The FRA grants for US rail intercity will fund the projects aim to initiate, restore and enhance the US intercity passenger rail service around the country.