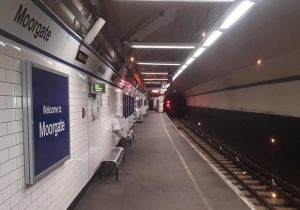 Network Rail has completed the Northern City Line renovation after a six-month programme of track renewal, station redecoration and intense cleaning through the tunnels and stations.

The completed work programme had started a year ago when Moorgate station was spruced up and from last December the programme swept on through the tunnels and the three other stations on the route (Old Street, Essex Road and Highbury and Islington). Essex Road’s platform walls have been treated to the same re-tiling as Moorgate station. At Old Street and Highbury & Islington, damaged and drab tiling has been removed or repaired, with walls resurfaced in readiness for future decoration.

At all four stations, the railway infrastructure manager has replaced the old light fittings with new LED lighting, and Govia Thameslink Railway have given the stations an extensive deep-clean over the past three weekends.

The passengers now can enjoy cleaner stations on the Northern City Line between Finsbury Park and Moorgate.

Under the Northern City Line renovation project, Network Rail has cleaned almost 17 km of tunnels, renewed over 3.4 km of 40-year-old track and replaced more than 1 km of the ballast, the stones which support the track.

“Over the last year, Network Rail has carried out significant work to clean the tunnels on the Northern City Line and to upgrade the track along the route. This work will improve the reliability of services, as well as making the area more pleasant for passengers and workers who use these stations,” Paul Rutter, Route Director for Network Rail’s East Coast Route, said.

Over the next few years, Network Rail will upgrade the signalling system in the tunnels, installing a new modern and reliable digital system which will lead to project’s completion.

The renovated track and tunnel work will make services more reliable, reduce noise and vibration from the railway and improve the condition of the tunnels for both passengers and railway workers.

Along with the improvements at the stations, and a new GBP 240 million (EUR 268 million) train fleet entered services last year.

The coordinated work programme has been carried out by Network Rail and Govia Thameslink Railway (GTR), who operate Great Northern train services between Hertfordshire and the City of London terminus.