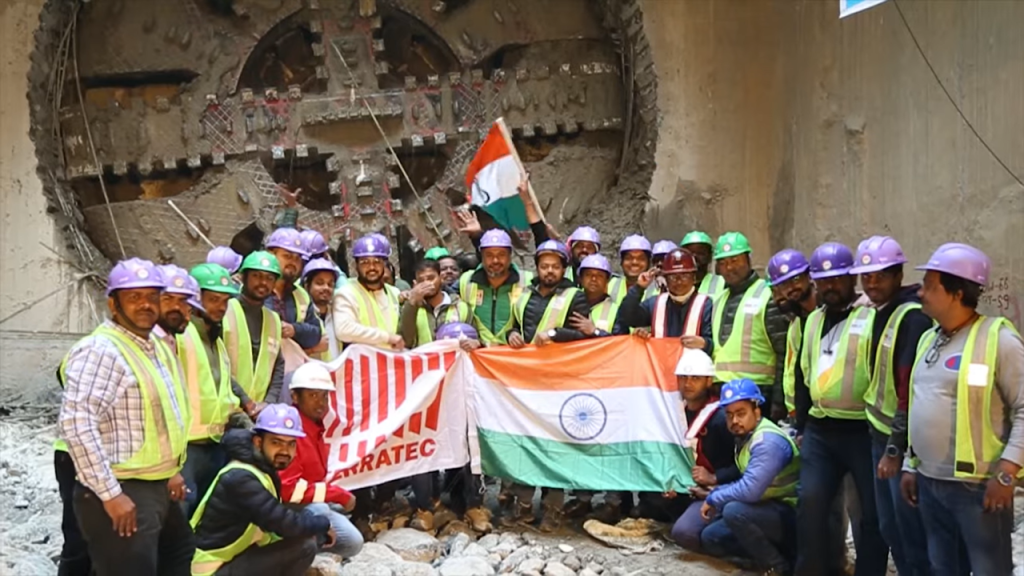 The TBM completed to dig 2 km of the tunnel between Bhainsali station and Meerut Central station with the works being implemented by Afcons Infrastructure which won the Package 8 contract under which is responsible for the construction of 5.7 km of tunnel including three stations – at Begumpul, Meerut Central and Bhaisali.

Meerut tunnel is the longest on the RRTS corridor and excavation work started in February 2022 and was completed on 15 December 2022.

The first tunnel breakthrough in Meerut tunnel has been celebrated in October 2022 when the TBM Sudarshan 8.3 arrived at the Begumpul RRTS station.

The under-construction Delhi – Meerut RRTS project is an 82 km rail system out of which 14 km in Delhi. Under the project, six tunnels will be constructed two of them being completed. The new rail network will be served by 25 underground and elevated stations and two depots at Modipuram and Duhai.

In January, Alstom India announced the completion of the first four trains for the new system and will enter operation on the first 17 km of section. The first train has been delivered in May 2022 and entire fleet will be 100% made in India with over 80% localisation and are being manufactured in Alstom’s factory in Savli (Gujarat).

In 2021, the French company started the construction of the trains which will be deployed on the sections covering the first phase of Delhi – Ghaziabad – Meerut semi-high-speed rail corridor. In 2020, Alstom was awarded a EUR 436 million contract to design, build, and deliver 210 regional commuter and transit train cars and to provide comprehensive maintenance for 15 years. Under the contract, Alstom will deliver 30 six-car regional commuter trainsets and 10 three-car intracity mass transit trainsets. The trains are equipped with air conditioning systems, CCTV cameras, fire and smoke detector, Wi-Fi and USB charging, dynamic route display maps and auto controlled ambient lighting system. The trains are designed with a 2×2 transverse seating concept, and provide passenger increased comfort as well as wide gangways, overhead luggage racks, large windows and they are also adapted to passengers with reduced mobility.

Wabtec is the provider for critical train components for the train fleet including modern technology for brake systems, pantographs as well as fully integrated passenger information systems.

In addition, Alstom will also design, install, test and commission the signalling and train control system, the supervision, platform screen doors and telecommunication systems for the entire corridor which will be India’s first rail line to adopt the ETCS hybrid Level 2 signalling system, the core component of the ERTMS.

In August, Nokia has successfully tested the voice and data call over 4.9G/LTE private wireless network to support the ETCS L2 installation. The company will install its solutions along the entire corridor, under a contract awarded by Alstom in January 2022.

In July, NCRTC awarded Deutsche Bahn a 12-year contract to operate and maintain Delhi – Meerut rail system including the 40 trains and the rail infrastructure.

The project has been approved by the Indian Cabinet in 2019 and the construction work for the new corridor started in January 2022 which included the 4.3 km viaduct near Dharamshila in Delhi.

When completed, the Delhi – Ghaziabad – Meerut rail corridor will reduce the travel time by 40% with trains running at 180 km/h. It is expected that the new line will be used by more than 800,000 per day.
This is the first out of 8 planned rapid rail corridors providing regional services in the National Capital Region connecting Delhi with the major India’s cities. The future lines will shift travel pattern towards railway services at both national and suburban areas.