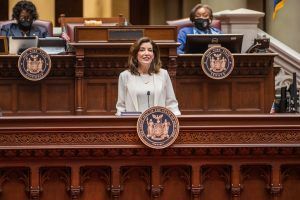 The Governor of New York Kathleen Hochul instructed the MTA to begin the environmental review process for Interborough Express line, a new transit line that would connect communities in Brooklyn and Queens.

The line will run along 22.5 km (14 miles) of existing freight tracks, would stretch from Bay Ridge to Jackson Heights and could connect up to 17 metro lines including the Long Island Rail Road. It is expecting that 1 million passengers will use the new connection each day.
The project would use the existing Long Island Rail Road’s Bay Ridge freight line and the CSX tracks in Queens connecting 15 neighborhoods through several new stations in communities which are not currently served by rail transit.

“It’s time to invest in the bold, cutting-edge infrastructure projects that will make a real difference in the lives of everyday New Yorkers that deserve reliable public transit connecting them from work to home and everywhere in between,” the Governor Hochul said.

More than 100,000 commuters make daily trips within or across Brooklyn and Queens, often relying on buses that get caught in traffic along a tangled and crowded street network. The new transit line will provide end-to-end travel time of less than 40 minutes, although most trips would be along shorter segments of the line. This would provide significant time savings for interborough Brooklyn and Queens trips compared with existing transit options.

The Interborough Express line would provide critical mobility, creating better links for travel to and from Manhattan as well as key connections among neighborhoods, across boroughs, and opening up new opportunities for reverse commuting into Nassau and Suffolk Counties.

“This project would smartly repurpose existing infrastructure to add mass transit and create access to jobs, education, and opportunity for so many residents of Queens and Brooklyn,” MTA CEO Janno Lieber said.

The new transit line will run from Bay Ridge-Sunset Park (southwestern of Brooklyn) and East New York, to Queens neighborhoods (Ridgewood, Middle Village, Maspeth, Elmhurst and Jackson Heights) and new stations will be constructed in areas not currently served by rail.

In addition to transit service, the existing Bay Ridge Branch corridor can service cross harbor rail freight and would dramatically reduce regional truck congestion and expand freight movement strengthening the supply chains which are still struggling to recover from the pandemic. According to the transport planners, the harbor rail freight and passenger service on the Interborough Express will work together to encourage green mobility and to remove the bottlenecks on the transport network. In this context, the governor will also direct the Port Authority (PANYNJ) to complete environmental review for the Cross Harbor rail freight tunnel which will improve freight transport across New York Harbor between the east-of-Hudson and west-of-Hudson regions.