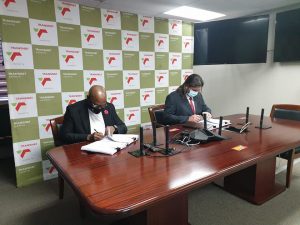 Mozambique Railways and Transnet Engineering have signed a contract for the supply of 300 gondola cars worth ZAR 400 million (USD 22.87 million).

Under the agreement, Transnet Engineering is responsible for the design, manufacture and deliver the new gondola cars.

This agreement follows the delivery of over 300 locally manufactured freight wagons in 2019, with a final batch of 100 wagons sent in December.

The contract is part of Mozambique Railways plan to revitalize the railway freight transport and the railway industry. According to Transnet Engineering, the awarded contracts further strengthens the relationship and collaboration between the two companies and represent a demonstration of Mozambique Railways’ confidence on South African rail manufacturing capabilities.

For Transnet Engineering, part of Transnet holding, the contract is a new successful step of its strategy to expand its footprint in Africa and to become an important rolling stock manufacturer sub-Saharan Africa.

Transnet Engineering supplies rolling stock to numerous heavy haul industries in Africa. It manufactures 4 500 new wagons per year and maintains a fleet of 75 000. The flagship products of the wagons business are its CCR, CCL, CHR1 coal wagons, CR14 iron ore wagons and CR 19 manganese wagons. Built from 3CR12 corrosion-resistant steel, these wagons have an extended lifespan of more than 20 years.

The 2019 financial year was a difficult trading environment for Transnet Engineering where cross-border orders were less than the quantum received in 2018 and less than 2019 expectations. The decline in orders had an overall negative impact to financial performance, which showed a total revenue reduction of 6,4% to ZAR 10.5 billion (USD 601.5 million).