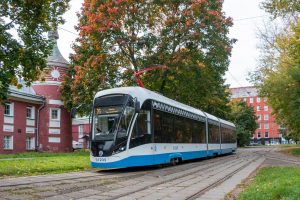 The new Vityaz-M trams are different from the previous models, with additional 10 seats compared to the previous trams, reaching a capacity of 70 seated passengers.

The trams have wider gangways, heated air curtains on the doors and are equipped with more powerful and quiet air conditioners.

Other improvements include special area for bicycles, bigger screens and sensors that monitor the presence of passengers near the door to optimise door operations.

By 2023, Moscow intends to replace its entire existing old tram fleet with low-floor trams vehicles. Currently there are 800 trams in the Russian capital and 50% are low-floor three-section Vityaz-Moskva trams. The city is focused on a complete renewal strategy of its rolling stock. In the last ten years, 70% of the fleet has been replaced and in the next three years, only low-floor trams will operate on all Moscow routes.

Since the beginning of 2020, over 40 million trips were made with the Vityaz-Moskva new-generation trams. 375 Vityaz-Moskva trams are running on 25 routes in the northeast, east, southeast, southwest, south and centre of Moscow.

Previously, it was announced that the track infrastructure of Moscow’s tram network would be managed by Moscow Metro. Centralised management and consequent modernisation is expected to increase tram speed, improve track maintenance, halve number of repairs and cut maintenance costs.

The tram is one of the key modes of transport for the city’s inhabitants. It ranks second after the metro transport in terms of carrying capacity. In 2019, the tram network carried 212 million passengers, which is 12 times more than the population of Moscow.